The Zoots perform at Blackpool Tower Ballroom PART ONE

We’ve been looking forward to this weekend, since it was booked back in April last year. 41 Club member Kevin had spotted us perform on a cruise and emailed to ask if we would be available to perform as the band for the 41 Club Annual Conference ‘Blackpool Roxx’ on the weekend on the 21st and 22nd of April. 41 Club was formed in 1945 to provide a way for members of Round Table to continue their friendships after retirement from Round Table at the then obligatory age of 40. Once a year they meet for their National Conference, this year the conference was to take place at Blackpool Tower, where The Zoots would be performing on Friday and Saturday evening!

The day began early, 10am for most of us, 1015am for bass player Tommy (late) Lloyd. We set off on the 4 hour journey to Blackpool. Spirits were high as we journeyed up the M5 and M6 to ‘The North’. We’d been in touch with Kevin and the team from The West Coast Group in the lead up to the event. Being such a huge venue, The West Coast Group would be providing the PA and lighting for the room.

The journey was pleasant, we stopped for sandwiches and a coffee half way, and before we knew it, we had made it to Blackpool! Eeeeee… Fortunately our lead singer, Jamie, had visited the venue a couple of weeks ago so he knew exactly where to go for us to load in. It was every bit as amazing as we thought it would be: 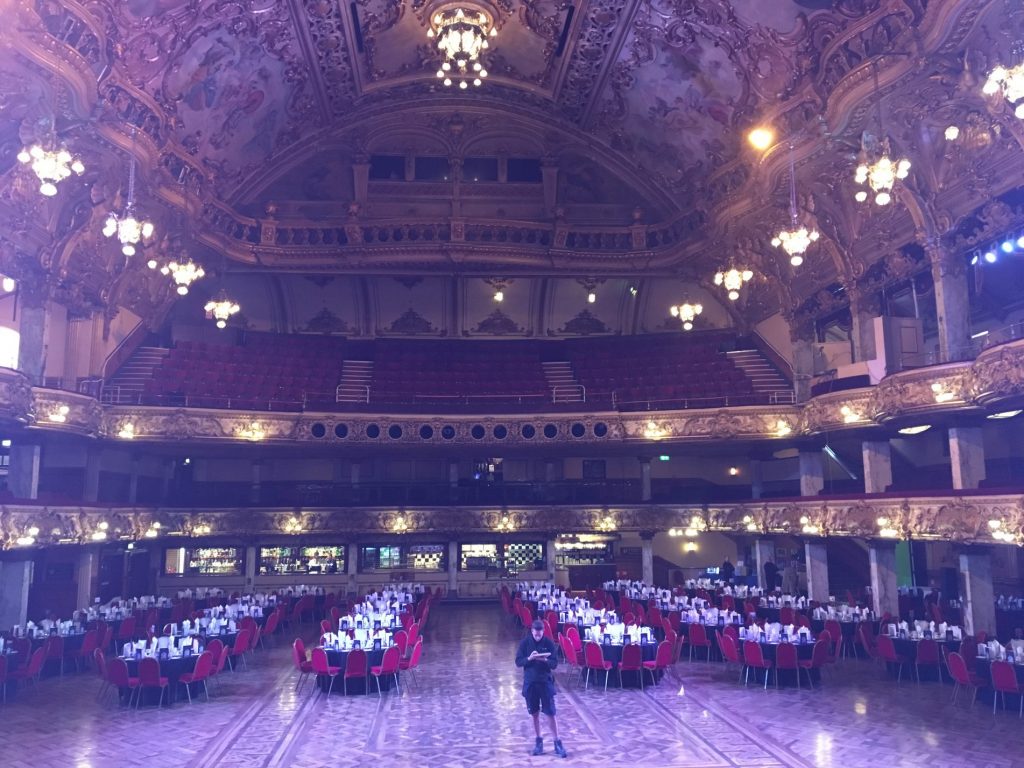 I KNOW! What an amazing venue right? The staff at the Tower were really helpful, and Jamie’s prior visit to the venue really helped us with the load in as he new exactly where to go. We met with the team from The West Coast Group who were super friendly and helpful. If you ever have a chance to work with these guys, you should. They were so friendly and knowledgable and helpful, we can’t recommend them enough!

We’d left lots of time for set up and soundcheck which was great as we had lots of equipment to load in and, being such a huge room, we knew we’d want a lot of time to soundcheck. Here’s bass player, Tommy to show you around.

Simon Small was especially excited as he was using his new Ludwig Legacy drum kit at a concert for the first time with The Zoots!

Here’s Tommy to show you the backstage area.

After a few hours, we were all set up and ready to go! Set up looked a little something like this:

Doesn’t it look amazing. So impressed with the set up from the team from The West Coast Group –  everything looked totally incredible.

After set up we had something to eat, and had a bit of a rest and then a warm up before our show.

Before we knew it, it was time to go on! We crammed in so many songs from the sixties into our set. We had songs from The Beatles, The Kinks, The Who, THERE WAS SO MANY I JUST CAN’T REMEMBER THEM ALL! One of my favourite parts was when Barry Durman joined us on stage for a number, it was great fun! As a thank you, we gave him a Zoots Tshirt.

Here’s a little vid of some clips of the show and Tommy and Simon afterwards!

Thanks so much for having us, we had the best time with The Zoots  organiser Kevin Lovett and the team from West Coast.

Read what happened on the Saturday night, here.

Love from, Jamie, Harriet and The Zoots

Why book The Zoots