Today it’s the 23rd of May. It’s a Saturday, it’s bank holiday weekend and it’s gloriously sunny. Our day begins here at Zoots HQ, here in Wiltshire. We’ve had a busy week preparing for the weekend, taking lots of enquiries for next year (and the year after that!), organising and liaising with our lovely clients for our upcoming shows and preparing for our first Royal Caribbean cruise of the season which we’re heading out to meet next week! We had the best time last week performing for the NeST charity fundraiser in Little Hadham and we’re excited to see what this weekend has in store. We are the wedding band in Gloucestershire. And what a place to begin our journey…Emily & Jack booked us for their wedding back in September 2014. I remember checking out the website for the Barn at Berekley at the time and being very excited about performing there.

The Barn at Berkeley is a privately run, family business. Situated on the edge of the Cotswolds, in the heart of Berkeley Vale, The Barn at Berkeley is a breath taking Cotswold stone venue, lovingly restored and full of distinctive charm and character. The land was originally part of the historic Berkeley Estate and has been in the Cullimore family for over 75 years.  You can read more about the barn here: The Barn at Berkeley. Amber, Matt and all the staff were particularly helpful and directed us where we needed to go and even made us a cup of tea which was really appreciated.
Emily and Jack were very lucky with the weather on the day it was a really hot day. They had a really cool vintage Ford Escort for the wedding car!

We arrived at around 6pm to set up and soundcheck before Emily & Jack’s first dance at 8:30pm. We loaded in through the back which meant we could get really close to the stage which was great. We have a lot of heavy equipment so the closer we can get to where we are performing, the better! We loaded in through the beautiful garden area, it was lovely and picturesque and a great place to relax during a wedding.

We loaded in a began setting up. Fortunately there was a large partition which we set up behind. It was great as it meant we could be relatively discreet. I even took a few sneaky shots over the partition. It was during this time we met with Marcus from Big Eye Photography, check out his website, it’s preeeee-tay awesome, so much so, I’ve just lost the past 45minutes browsing through his gorgeous photos. Marcus was lovely and a pleasure to chat to. We found out he’d called his new born son Ben, so our lead guitarist Ben was pretty psyched.

The room was really cool. Exposed stone, massive doors, cool lighting and a high ceiling gave the barn a intimate but roomy feeling. It was the perfect size and we had a nice high stage which was a treat! The bar and loos we’re just off the main room which is great for an evening of dancing, meaning no one is ever too far away to enjoy the music!

Set up was smooth and sound check even smoother. The room looked amazing, I could tell Emily and Jack had put a lot of thought and effort into making everything just perfect on the day. I loved the cake, the flowers and the paper pom poms hanging from the ceiling. But my favourite thing would have to be the Krispy Kreme tower, they looked incredible!

Soundcheck went swimmingly. Jamie is so good and such a terrific singer. We met with Dj Pete who would be DJing in between and after our sets. He was a legend. He showed us where to park and load in and set up and was generally very helpful and lovely. We could tell it was going to be one heck of a night. The stage was set and we went to get changed. 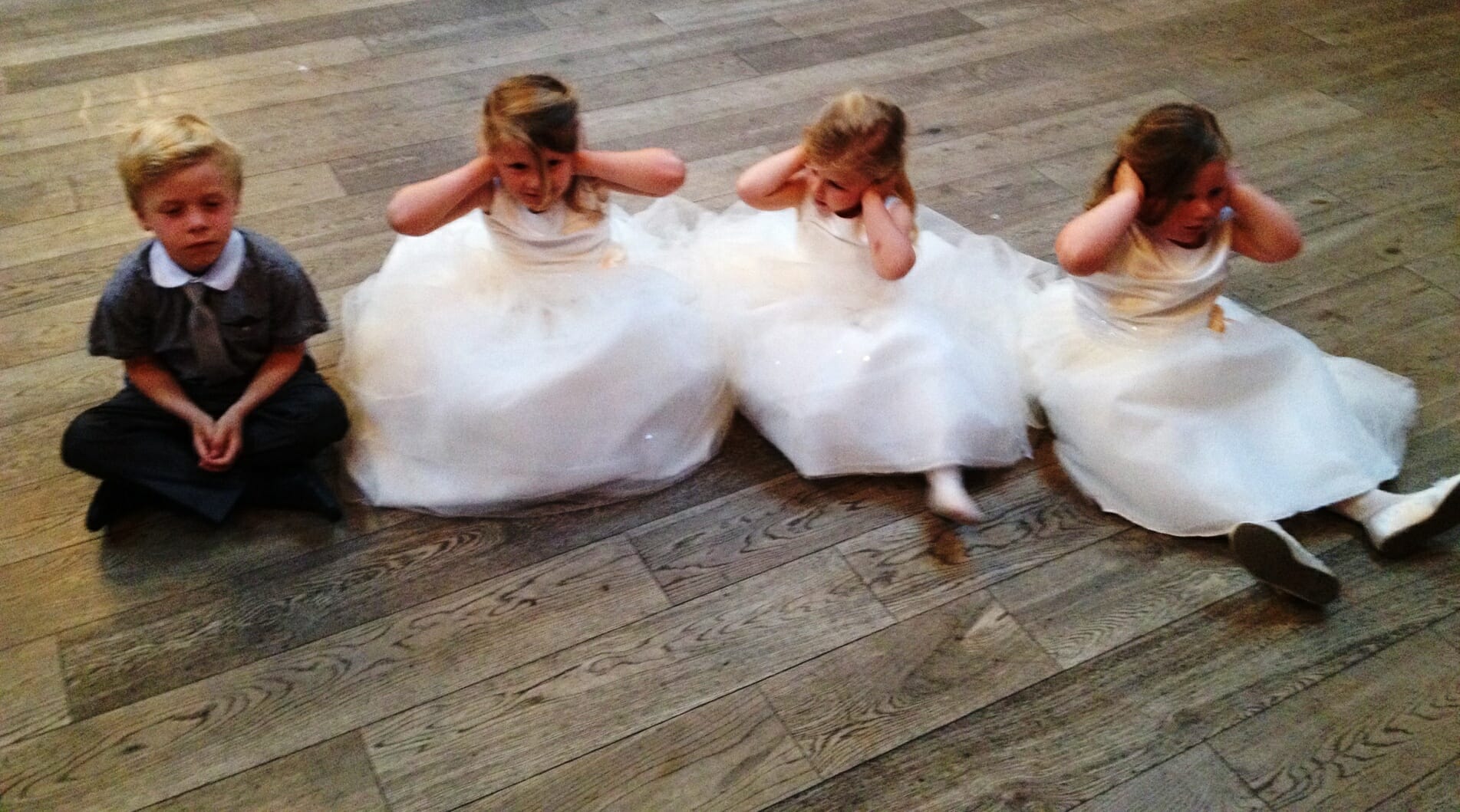 We quickly got changed and had a photo with Chloe the maid of honour. She was a fantastic help on the night.

We were ready for the first dance I’m yours by Jason Mraz which Ben Jones sang beautifully. It was so brilliant, Emily and Jack looked so in love!

The rest of the set went really well and everybody was dancing to all the songs from our repertoire!

We had a quick cup of tea whilst the Dj Pete kept everybody dancing! When The Zoots came on for our second set we had a conga and made a dancing circle which was great fun. Everyone took it in turns to dance in the middle! Jack and Emily got the biggest cheer of course!!

At the end of the show after we packed up all the gear we had a few pictures taken with the lovely bride Emily.

Thank you so much to everyone who was at the wedding, we met some really nice people and it was fantastic to be part of such a special day. Congratulations to the lovely bride and groom Emily and Jack Taylor.

Special thanks to Amber, Matt and all the staff at the Barn at Berkeley.

Well done to Dan Gill, I can’t believe it was only his second gig with the band! Well done to Ben Jones for doing a great job and singing the first dance so well. Well done to Mike and Jamie too! Well done Zoots team!
Find us on Facebook
Follow us on Twitter

Thank you for reading.

We had a lovely message from Emily after the wedding:

“Thanks Jamie, everyone has been saying how awesome you all were! Thank you so much for being flexible!! Will be looking for an excuse to book you again x”