Today, it’s a special one on the blog for The Zoots. It’s the 4th of October 2014 and SAM IS GETTING MARRIED! I’ve known Sam since school. At the age of 11 we became friends as we both embarked on 5 year venture through secondary school. We then journeyed through college together and went our separate ways a few years later for university. Our paths have crossed over the years as we’ve kept up to date with what each other has been doing via Facebook and mutual friends.
Sam got in touch in January 2014, having seen The Zoots on The Independence of The Seas a few years ago, she wondered if we were available as a wedding band and if we would be available to perform at hers! We said yes!!! I was so excited and nervous and happy and smily and feeling so wonderful that Sam had asked us! The 4th of October came round so quickly. We’d been in touch with Sam & David in the run up to wedding, organising timings, song choices and that sort of thing. We’d even paid a visit to their wedding venue, Hoghton Tower up in Lancashire…and what a venue (just wait until you see the photos below!) Sam & David had so kindly invited Jamie & I to the wedding ceremony and wedding breakfast, what a treat! Something we so rarely get to see. It was wonderful and we felt so very special to have been invited.

The night before we’d been in Oxford performing at Claire and Dan’s wedding at the Great Barn. We travelled North straight after, ready for an early start the next day. The day began around 10am for us, grabbing some brekkie and getting ready for the ceremony which was scheduled for 1pm at the local church.

We met up just before 1pm with my sisters and friends and we were able to meet David for the first time too, he was lovely! We headed up to the church and took our seats and waited quietly for Sam to arrive. A few minutes later, whispers and hushes told us she was here. Sam walked into the church and looked out of this world gorgeous. She took everyone’s breath away. Her dress, hair and make up were just beautiful. I had to hold back the tears as she made her way down the aisle. Here are a few shots from the church.

After the church, the guests were taken via double decker bus no less to the venue a few miles away Hoghton Tower. We arrived and were greeted by some delicious drinks and yummy canapes.  Jamie and I were able to have a chat with Sam & David and meet some new people as well as catch up with old friends. There was a really wonderful pianist and vocalist playing during the drinks reception. David said he and Sam had been out in Manchester very recently and heard her play, they asked if she was free on the day of the wedding and she was! Sometimes last minute meant-to-be meets are the best! Band Wiltshire

Inside Hoghton Tower was amazing. Monochrome floors, huge fire places, oak furniture, flowers everywhere! Sam & David really had thought of everything, with their purple and white theme. It was decked out so beautifully. There were rooms everywhere, all with their own fire places and unique feel. Candles were on every window, and the soap in the bathroom matched Sam’s dress!

“Hoghton Tower is a Grade I listed building, is the ancestral home of the de Hoghton family. The de Hoghtons are descended directly from Harvey de Walter, one of the companions of William the Conqueror, and through the female line from Lady Godiva of Coventry, wife of Leofric, Earl of Mercia. Re-created in 1565 by Thomas Hoghton, this ancient, fortified, hilltop manor house occupies a commanding position, 650ft above sea level. The Tower lies mid-way between Preston and Blackburn, with magnificent views of Lancashire, the Lake District and North Wales. Hoghton Tower is the only true baronial hall in Lancashire.” (http://www.hoghtontower.co.uk/about/history/)

Below are some photos from the day.

We ate in the ‘main room’. (I’m sure there is a more ‘official name’ but I can’t recall). It was wow! wooden floors, huuuuuge ornate windows, flowers, flowers, oh the flowers! They were amazing. Candles, fireplaces, high ceiling, old castle bits, axes and swords. It was brilliant. My photos aren’t very good but I hope you can see just how awesome it was.

Dinner was delicious. Some of the best food we have ever.ever.ever tasted. Provided by local restaurant/caterers Northcote. Taking a unique approach to food, Northcote...’have always had deep loyalty to artisan  producers and the great larder of Lancashire, with seasonality at its heart. The menus have a core of flavours that need to be true, dynamic with a blend of modern influences. The ultimate aim is to delight our guests with flavours that are memorable, presentation that is sensational and an overall experience that lingers forever.’ (http://www.northcote.com/the-restaurant). If you ever have a chance to dine there; do it!

To start was cheese souffle, (*salivates at the memory of its deliciousness*) or scallops and beef fillet or mushroom tortellini for main course. To finish, desert was a lemon-y/compot-y type mousse with poppy candy biscuity topping and dollop of cream on the side.  My gosh it was so wonderful. We savoured every mouthful! As day turned to night, and the sunset over Hoghton tower, I managed to take this sneaky photo of the lovely clouds and the last of the sun. 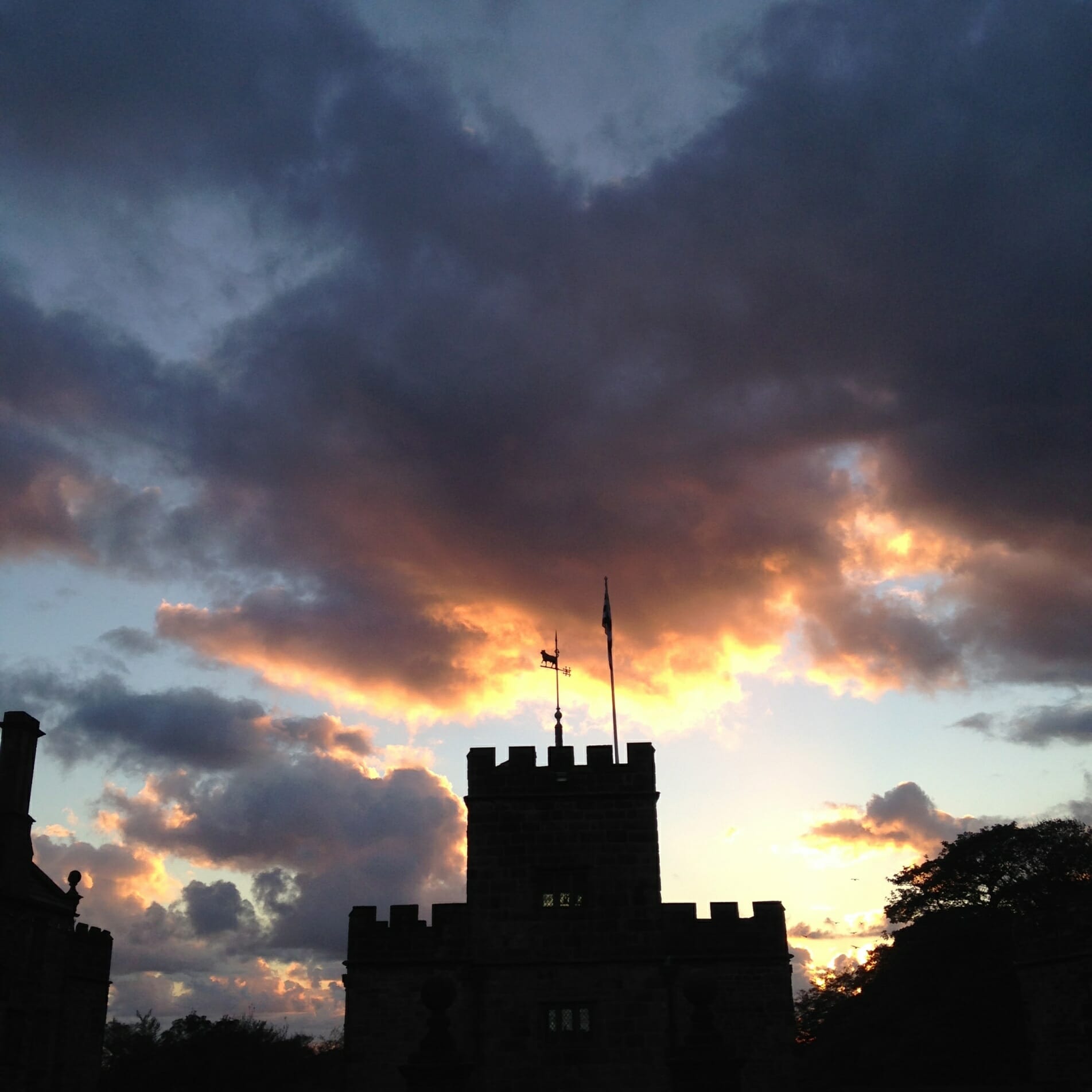 After dinner it was time for speeches. They were a hoot. I loved listening to them, finding more about David & his family and hearing some great stories about Sam growing up! During the speeches, the rest of team Zoots arrived, having spent the afternoon a few miles away at Lowther HQ. The day was running slightly behind schedule but team Zoots, were so brilliantly prepared, it meant we were able to set up so quickly when our time came, allow us to catch up on a few valuable minutes!

Before we knew it, it was our time to shine! I was so nervous and excited. I wanted it to be so perfect for Sam & David. We set up quickly, bringing in the kit as fast our legs would allow. Being a very (very, very) old building, the electrics weren’t as readily available as in newer buildings. 2 sockets were located near our stage area but the other 2 we needed were way way away on the other side of the room. We carefully ran an extension the length of the room and taped it safely down. Well roadie sisters Emily & Pip did, they were a great help!

We have to plug in around 30 units as we have a lot of equipment, so the more power sockets we have access too, the better. We are so glad the team at Hoghton Tower were understanding and accommodating to our electrical needs. After set up and quick change of clothes, we were on!

Sam & David had chosen ‘Can’t Take My Eyes Off You‘ for their first dance. It was lovely. Once again, I found myself holding back the tears. It was lovely to watch Sam & David dance together. And we were so lucky having an elevated stage in a bay window, it meant we got a great view! Following the first dance, we launched into a high-tempo, floor filling first dance! It was great to see so many familiar faces on the dance floor!

In the blink of an eye and the strike of a chord, the set was over. We had a quick break, a quick drink and we were back on for set 2.  Just as ‘wow’ as the first, it went so quickly. I know we played Forget You, I predict a riot, 500 Miles, Wonderwall, All the small things and We Are Young, I just can’t remember it. In a blur of music, dancing, singing, photos, smiling, waves, clapping, jumping, swaying and bopping. I know it all happened, as we have the photos! And even a little video footage of Angels
And some of 500 Miles, Sam dancing with a Scotsman!

I loved seeing new friends Claire & Anna (who I’d just met that afternoon) enjoyed themselves! Sam & David had chosen some great songs from our repertoire which we used to build our sets around. Highlights included: Pretty Woman/Satisfaction, Really got me/All day night, I want you back jam, Sweat, Crazy little thing called Love, Happy, Faith. It was brilliant.

And here are the photos, slightly blurry and shaky but you get the gist, that this was one of the best nights ever!!

Here’s a short video of some of the wedding guests, shot by Emily Lowther

Have a great honeymoon in Africa, hope to see you again very soon! Lots of Love from, Harriet, Jamie and The Zoots xx