The Zoots perform as the wedding band at Elkstone Manor

Tonight we were the wedding band in Gloucester and this week has been amazing. There’s been storms, sunshine and we’ve had rain! We’ve had amazing sunsets, incredible views and some truly marvellous days. A busy week here at Zoots HQ. We’ve been making our arrangements for next week for WHEN WE GO TO GREECE! And for the week after that WHEN WE GO TO ITALY. It is going to be amazing and hot and glorious and lovely. *packs cossie*. We’re heading overseas to perform with our 1960s show, it’s still us, but we dress more ‘sixties’ and perform load of awesome hit from the 1960s, it really was one of the best times for music.

As a band we’ve had loadsa enquiries for this week and next, some of them even for 2017! Crikey, you guys are PLANNERS. We like. We posted our blog about our performance at The Potato Sheds in Kimbolton, what a night that was. And we finally got to see the incredible photos and complete our blog for our 1960s show at June Cadman’s 70th birthday party, that lady sure knows how to throw a party.

You may have guessed it, we’re very much in full swing of our busy season and we are loving it loving it loving it. When weren’t not working away at Zoots HQ, you can usually find us nearby, enjoying the sights of the countryside Wiltshire. It is glorious! This week, we’ve also been getting ready for today. Today it’s the 4th of July. And today is the wedding of Doyle and Victoria at Elkstone Manor. It’s every bit as amazing as it sounds.

Elkstone Manor is quite a unique venue for a wedding, holding only around 5 a year, meaning that Christine and her team can take care and give you every bit of attention you deserve whilst planning the special of most special days. “Built in 1873, Elkstone Manor is a Cotswolds Manor country House, located on the edge of a pretty hamlet seven miles south of Cheltenham. There are eight acres of grounds, including woodland, wild, formal and informal gardens.”

The Zoots arrived at Elkstone Manor and met Christine again. It was lovely to see her. The place looked beautiful. Wow the sun was shining and we were looking forward to our performance. Here we are:

The marquee was provided by those awesome chaps at Mudway Workman. And boy, did it look awesome.

The marquee was decked out in American and British flags and icons. Both The Queen and Statue of Liberty made an appearance. Not only were the couple married on July the 4th, but Doyle is from the USA and Victoria from the UK, so lots of the guests had come from all over, for what (little did we know at this point), was going to be ONE OF THE BEST NIGHTS EVER.

I really wish I’d had time to take some more photos here as there really were some cool bits which I wish I had photos of to show you all. If any of you lovelies who were there on the night have any photos, please send them to us. We’d love to see them.

The load in was really handy as an entrance had been made just for us really close to the stage (Thank you, thank you, our backs and arms and muscles thank you!). A marquee is generally really great for sound for an electric band as it has lots of material/lining which really helps to absorb the sound, making it a lot easier to control. A room with a lot of reflective surfaces can be really tricky, as its harder to control the sound as it ‘bounces off’ and bounces back from a lot of the surfaces.

Today was not only special because it was the wedding of Doyle and Victoria. It was also special for another reason. Nope, not 4th of July, although that is special too. Today is the day Ben revealed his new amp ‘THE VICTORY’. It was beautiful. And it matched his Fender (Deluxe) Stratocaster (USA). Just look at it. Not only did it look the biz, this amp totally sounded the biz. We all struggled to concentrate as we spent most of the evening in awe of THE VICTORY. When we could, we made ‘V’ shapes with our arms and made tiny bows whenever we passed the amp. 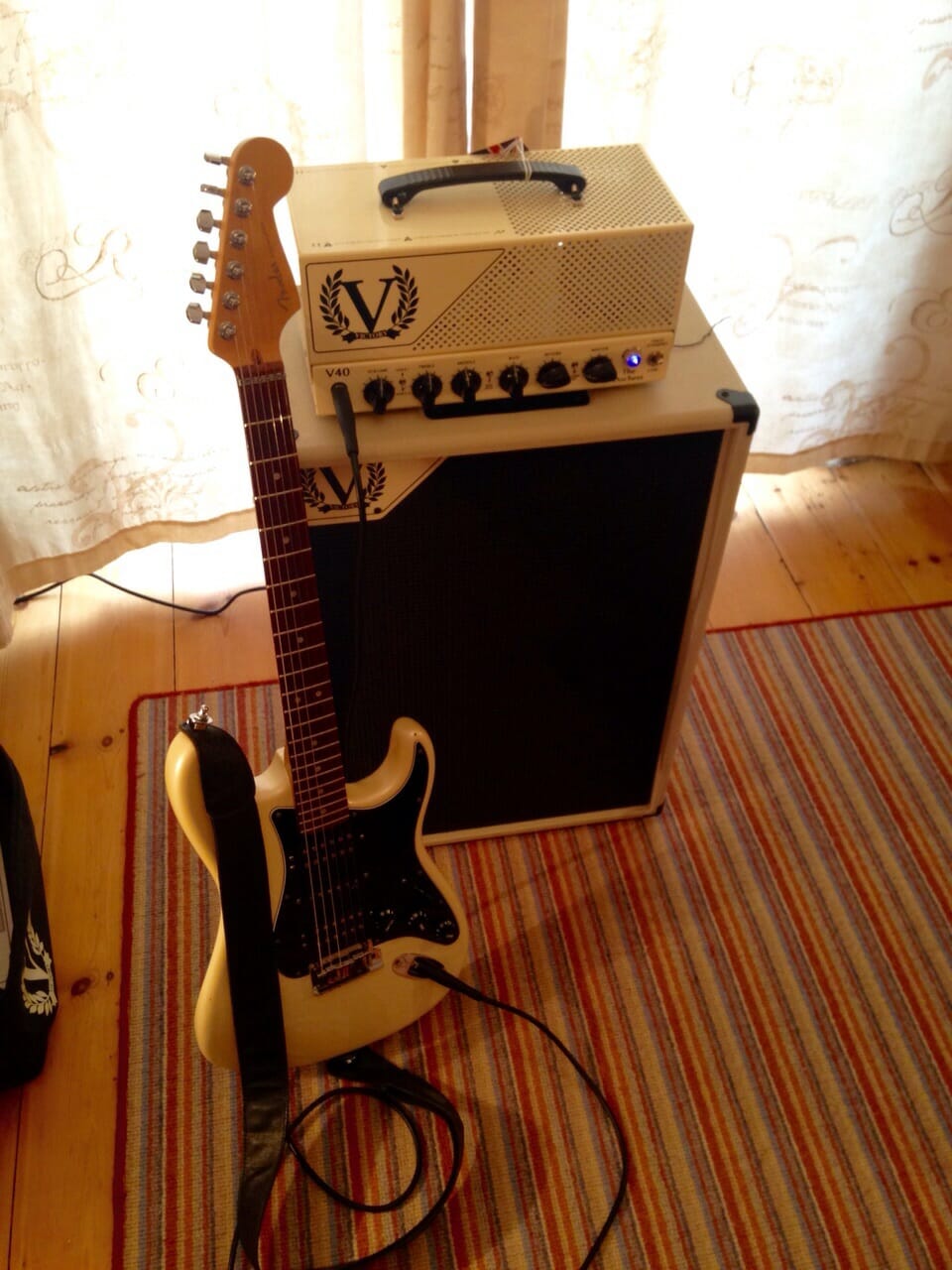 Doyle & Victoria has really kindly arranged for us to have a green room attached the marquee for us to use, get changed, warm up and relax in. The room was ideal as it had chairs, table, a heater (you never know), and privacy and was really close to our performance area. We are so appreciative every time we have a room with everything we need.

You won’t believe the amount of green rooms we’ve had with out heating, lighting, table but no chairs and even a couple with out lights!! So when we get everything we need we’re all pretty happy, which makes for a great performance as it means we can spend our time before sitting comfortably and warming up.

We plugged, in and prepared ourselves. We scouted the crowd, they looked like very happy and seemed to be enjoying the day. Little did we know they were going to transform into THE BEST AUDIENCE WE’VE EVER HAD, EVER.

Victoria and Doyle had chosen not to have a first dance so we launched straight into our first set. We’re pretty sure a dance floor has never (in the entire history of dance floors) been filled as quickly as this one was. It was a ‘blink and you’ll miss it’ moment. One moment we were looking at THE VICTORY AMP and the next moment, the dance floor was rammo-d. There wasn’t a space for a single body. (although I’m pretty sure both The Queen and the Statue of Liberty both made an appearance at some point).

Anywho, we cracked on. Victoria and Doyle had chosen loads of cool songs form our repertoire, so we included as many of them as we could.  It was wild.

We had to stop at some point. We needed water. And a rest. And a moment to gather our thoughts. Was that really as awesome as we just thought it was? Yes, yes it was. And we were going to get to do it all again in a little while. During our break, we ‘got all American.’

The band  were feeling pretty psyched at the point. Okay, so the second set went a little something like this. (Oh and, yes that is The Zoots lead guitarist Ben Jones playing his guitar on his head). (And yes our drummer Si Small really does have hands, you just can’t see them as they are moving so quickly).

Before we knew it, our time had come to an end. And then this happened:

We think they wanted us to play one more. Or perhaps they wanted more of THE VICTORY AMP, who knows, but we gave them one (or two, or three more). And they loved it. And we loved it. And they were happy. And we were happy. We’d had such a brilliant night performing for a truly lovely couple and a pretty special set of guests, can you guys come to all of our performances please?

Thank you so much to Doyle and Victoria for choosing The Zoots as their wedding band. We had a totally awesome night. Some would say it was a total VICTORY.

Lots of love from,

Harriet, Jamie and The Zoots xx

We received this lovely email from Doyle and Victoria following our performance:
“Jamie & Harriet, thank you so much for a wonderful performance at our wedding at Elkstone Manor.  You were amazing.  All of our guests loved you and had a great time dancing all night, and they’ve been raving about it ever since.  I was most impressed with your range; you did everything from Chuck Berry to Blink 182 brilliantly.  You truly are talented musicians and performers.  Thank you again!
Cheers,
Doyle & Victoria”

We also had a thank you from the father and mother of the bride:

“I just wanted to say a big thank you for making Victoria and Doyle’s wedding such a success – Without exception ( even us oldies ! ) agree you are simply the best  band we have heard play at any wedding / party type venue .
Love your blog – thanks again and enjoy your forthcoming trips to Italy and Greece
All the best for your future success
Pauline and Dave Lonsdale”