After a rehearsal early last September, I was chatting with Tommy’s lovely Aunt (Deb) who had just come back from a weekend at Twinwood Festival. Deb told me to contact the organisers at Twinwood as it would be an ideal place for The Zoots to play.
After a couple of phone calls; we had the organisers of Twinwood interested and they sent one of the team to see us perform at Goodwood Revival the following week. We put on a fab show at Goodwood and the next day we had an offer from Twinwood to headline the last day of the festival in 2017.

Nearly a year later having travelled via the UAE, Oman, Cuba, Jamaica, Holland, Belgium, France, Germany, Spain, Italy, Portugal and the Azores, we arrived at Twinwood! We were nice and early and the weather was fabulous! It was so hot and the atmosphere at the festival was already booming. He had a quick look round some of the stalls, we sat down, had a cup of tea, listed to the bands and soaked some sun.

We got changed in The Zoots van and tried to prepare ourselves for the quick load on the stage. It was shame our sound man Ed, was unable to make the show and we really missed him especially when we had to set everything up in record time.

We were very lucky we got to meet the photographer Stephen Astley-Jones backstage who very kindly sent us pictures from our show. Stephen really captured the feel of the festival.  The beginning of the show was a bit overwhelming as the stage turn around was so quick and there were so many things happening and lots of people saying lots of different things to me.

We kicked off the show with Johnny B Goode and I don’t know what was happening but the crowd were really enjoying it. The spirit of the audience lifted me and Simon’s fab drumming was keeping me in time! I ventured into the audience for our second song, had a little dance and shook a few hands. Ben took the front of the stage to perform ‘Apache’ which went down really well. I think the audience knew the steps better than we did!

Ben’s guitar playing was amazing! I really wanted to make the most of the amazing opportunity and was really enjoying it! Harriet’s energy was endless and she got an amazing response from the crowd when she sang ‘ Boots are made for Walking’

Tommy was all over the stage and savouring of every second at the Twinwood arena! He even did two entire laps of the arena when we played Wipeout! It was such a shame that Tommy’s Aunt (Deb) couldn’t make the show! Deb would have been so proud. Tommy really got the crowd going for Mony Mony. The Zoots were rocking, the size of the stage was fantastic and I really enjoyed exploring the whole arena throughout the show! I just had to run from one side to the other, I felt like Mick Jagger (when he was 30!). It was such an amazing opportunity to show everyone at the festival what we can do. Simon, Tommy, Harriet and Ben did so well to keep their nerve and put on an excellent show!

Here is a video of some short clips of he night, it gives me goosebumps watching it, it really was an amazing experience!

We ended the show with about four encores and the crowd kept asking for more! Well done to Emma Stuart who won a Zoots T Shirt and thank you for sending in the photo! 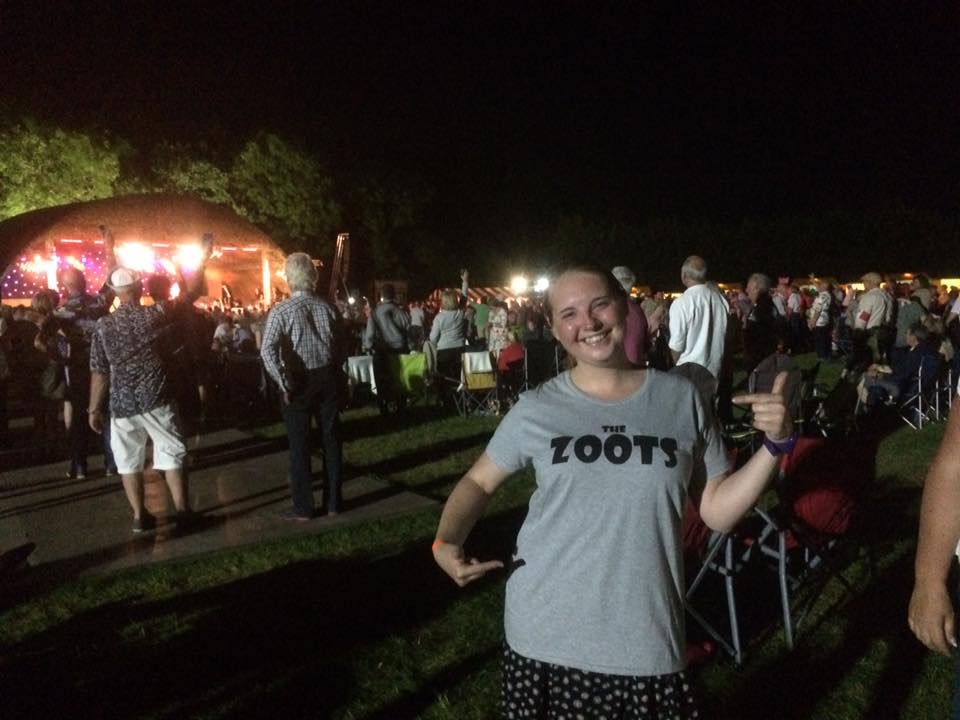 Thank you so much to everyone at Twinwood Festival for giving us the opportunity to perform at such an amazing festival. Our debut performance at Twinwood seems like a real turning point for the Zoots.  All those long days, late nights, years and years of plugging away; the hard work really seemed to be worthwhile for this one night. It was truly AWESOME!
To have all the crowd sing ZOOTS! ZOOTS! ZOOTS! at the end of the show was probably one of the best moments of my career so far.

We had so many lovely comments on our Facebook page and so many photos and videos sent in. The response was out of this world! Our special thanks to Mags West who provided the featured image at the top of the page!

Thank you so much to everyone for making this possible! We will be back in 2019 and we will be even better!

Thank you The Zoots, for an amazing night i will never forget – Mags West
A fantastic band to end the Twinwood Festival 2017 – Sue Strickland
The fantastic Zoots closed off a brilliant weekend at Twinwood Got everyone up out their seats – Christine Crowe
Great night at Twinwood festival Awesome sounds – Simon Elias
have to say you were all bloody awesome at Twinwwood I could have listened to you all night. a big well done and really hope to see you next year. – Michelle Jess
Thanks for a fabulous end to the festival! You guys were incredibly awesome! I’m 14 years old and I absolutely loved the music you played! – Poppy Westrop
Just seen you at Twinwood what a fantastic gig look forward to seeing you again – Mark Green
The highlight of my weekend at Twinwood, you guys were AMAZING. Thank you so much. – Sue Rowley
I thank you all for a fantastic evenings entertainment, really loved the show and hope you are invited back some time soon!! – Colin Stalgis
Struggle to find a band nowadays that look amazing, sound amazing & above all are really great people…must be great for you all to be a rarity! – Ashley Moore
Great performance ! a great bunch of musicians, pumping out some great songs of the 60’s, thanks a lot, hope to see you there next year ! …I must admit I shed a tear when you sang Hey Jude

☺ – Katherine Broughton
Amazing performance, hope to see you there next year – Jane Porter
One of the best groups over the whole weekend a great finish to a fab 4 days – Mandy Keedwell
What a fantastic evening! Thank you to The Zoots for making the Twinwood closing evening so wonderful!!! Thank you for such a memorable evening.- Judith Dalby

What a fantastic way to end Twinwood !!!!! Brilliant

?x – Allanna Solomon
Zoots Zoots Zoots absolutely fantastic what a brilliant way to end a brilliant weekend – Lynda Clements
Fantastic show loved every minute – David Walshaw
Thank you for entertaining us at Twinwood. A perfect choice for the last act of the weekend. I would love to see you again. I hope you will return to Twinwood.- Debbie Frame
Brilliant bunch of lads that finished the festival off so well. Your guitar has come home with us all and some of it will be taken to Australia very soon. Thank you. – Claire Wilkins
The Zoots I Loved every second of your performance. Right up there with the best acts of our time at Twinwood. You keep rocking & I’ll keep dancing

? – Marie Cairns
Had a great night. Fantastic to see youngsters enjoying the sounds of the 60’s. More 60’s at Twinwood. Best band of the weekend!!!!!! – Robin Field
Fantastic end to the brilliant weekend we’ll done to the Zoots – Andre Clements

Thank you so much to The Zoots team for working so hard! Jamie, Harriet, Ben, Simon, Tommy and Ed (we missed you!).
Find us on Facebook
Follow us on Twitter
See our photos on Instagram
Thank you to the photographer Stephen Astley-Jones