OK so July has flown by, what a year we are having! We’ve been so so busy, but its been great. We’ve been very lucky to visit loads of cool places (did you read our blog about Norway?), and perform for some amazing couples. Last week we flew to Stockholm. We were performing with our 1960s show on the Royal Caribbean cruise ship, ‘Brilliance of The Seas’. The day began with breakfast at Heathrow before boarding our flight bound for Stockholm.

We arrived in Stockholm, our hotel was awesome, really cool and modern. It was early evening when we arrived so we decided to take a stroll around the Old Town. It was a lovely evening.

After a good nights sleep we had one of the most amazing breakfasts…
After breakfast we joined the Brilliance of the Seas which was every bit as amazing as we remembered. Here’s where is gets a little bit hazy. Each day rolled into another with performances, sound checks and rehearsals.

We met some really great people who we hope to stay in touch with. Our shows went down a TREAT! Just when we thought we couldn’t get a better response than the last show, we did. I know we stopped here (below) at some point. It was called Visby and it was lovely. We took some photos. These are them.

Visby was lovely. Like walking into a fairytale or a disney movie. Really pretty streets and roses everywhere. It’s no wonder the city’s nickname is ‘City of Roses’. They had a spectacular botanical gardens which we enjoyed exploring. By 10am it was ROASTING so we stopped for a wee drink which matched our clothes. Visby was such a great place. Here’s a bit of info about it from wiki. (thank you wiki):

“Visby is a locality and the seat of Gotland Municipality in Gotland County, Sweden with 23,576 inhabitants, as of 2012. Visby is also the episcopal see for the Diocese of Visby. It is the only locality with historical city status on the island of Gotland. The Hanseatic city of Visby is arguably the best-preserved medieval city in Scandinavia and since 1995, it is on the UNESCO World Heritage Site list. Among the most notable historical remains are the 3.4 km (2.1 mi) long town wall that encircles the town center, and a number of church ruins.

Visby is a popular vacation destination for Scandinavians during the summer and receives thousands of tourists every year. It is by far the most populated locality outside the Swedish mainland. Visby is also the only municipality seat of Sweden that is accessible only by boat and air traffic. The University of Gotland is in Visby, and since 1 July 2013, it is a department of Uppsala University under the name Uppsala university–Campus Gotland.”etc, etc… Anyway, we liked it.

After our short visit, we headed back to the ship to grab a bite to eat and get ready for our next show. We had such a great time on the Brilliance, all of the crew and the guests were just lovely. At some point we stopped in at Harwich to pick up a new lot of passengers, before heading out to see again. Our last day took us to Copenhagen so we caught a flight home to the UK from there. We couldn’t leave without getting a photo with this guy at the airport: 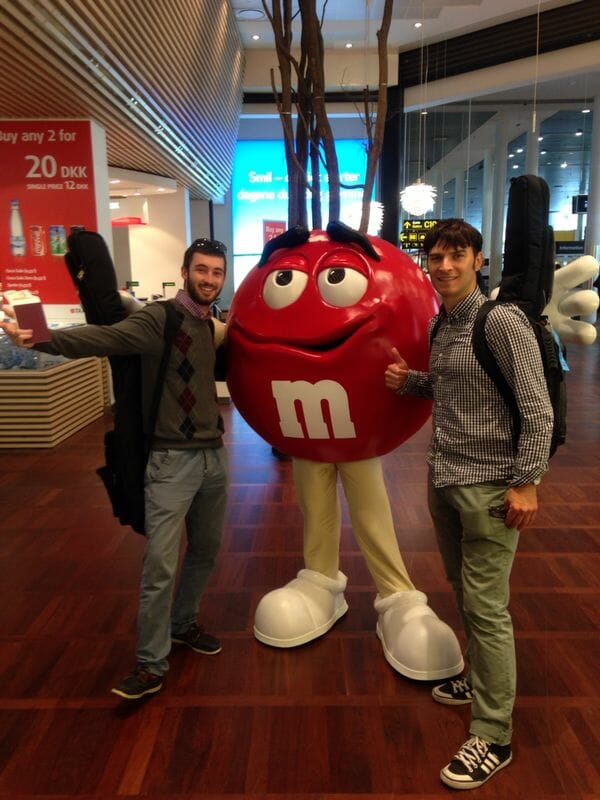 We had such a great time. Now we’re ready for the next adventure…Lisbon, Portugal, Barcelona then Pisa and a short break at home in Wiltshire Love from Harriet, Jamie and The Zoots x

The Zoots band have recently been booked for a wedding at The Assembly Rooms in Bath, a party at the Vineyard in Newbury a Mad Men 60s theme party,

Why book The Zoots ?