We arrived in Salerno, it was hot, it was sunny, it was glorious! We too a photo of us all before we left in a mirror. a Five-piece selfie. It’s not very good, we will keep practising to make it better. Salerno is in Italy, we took a photo by an Italian flag just to be sure. We didn’t know much about Salerno as we’ve been so busy (read about what we’ve been up to on our blog) so we didn’t have time to research it before we went.
Thankfully Wikipedia filled us in on all we needed to know on our return. “Salerno is the main town close to the Amalfi Coast, and is mostly known for its Schola Medica Salernitana, the first medical school in the world.” (Source, WIkipedia)

We got on a coach in search of a beach, sea and some pizza. In that order. On our way, The Zoots guitarist Ben Jones, stopped to looked at a plant. We stopped a little later to take a photo. We smiled in the photo and looked at the camera with our eyes through our sunglasses because the sun was so bright and hot.  Later it got even hotter and this happened… 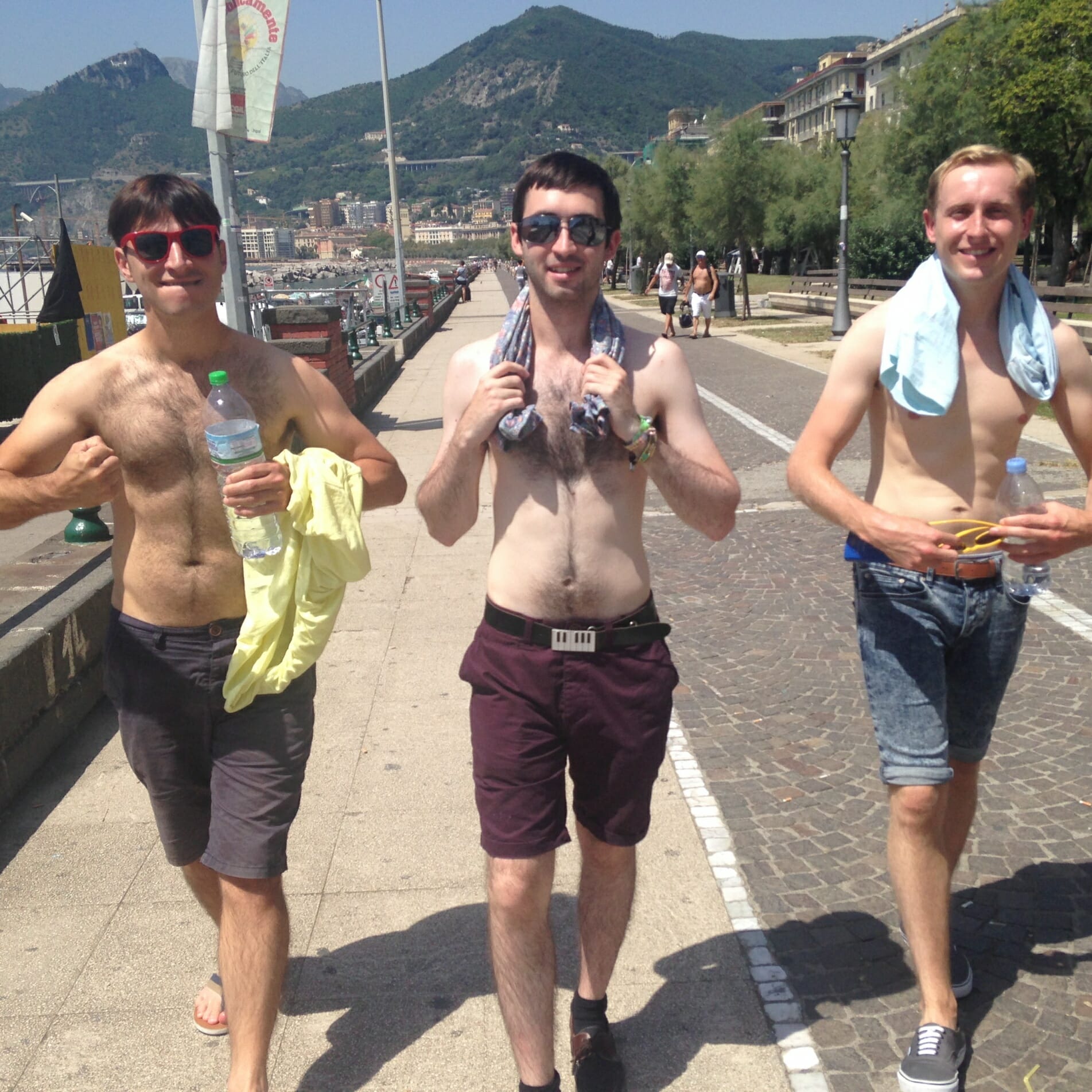 No they aren’t wearing nudey white hairy suits; that is their real bodies. It was so hot. The Zoots took off their clothes.

Some time later, after an incident we’d all rather forget with some suncream, and a sighting of Peppa Pig we happened upon a beach. Full of other like minded beach people seeking sun and the sea. We dressed into our beach attire and sat on the hot sand. It was so hot. We said ‘ouchy’ quite a bit. We were quite sad that we didn’t bring towels to sit on but it didn’t matter as it was hot, and the sun was shining and we were in Salerno. The place of Pizza, Sea and Beaches.

We sat on the beach and swam in the sea. It was delicious. I was quite worried about being eaten up by a shark but I made sure there was always someone else swimming further out then me, that way, I felt safe. It was truly wonderful swimming in the sea. It was so blue and wavy and relaxing and was lovely to cool off our feet which had been badly burnt by the incredibly hot sand. After swimming in the sea, we sat towel-less on the beach, waiting for the sun to dry our sea-soaked bodies. It didn’t take long and by the time we were dry, a man had arrived with a small cart of frozen treats. We knew we had to get out of there quickly before filling up on his ice-creamy goodness.

Just before leaving I took a photo of The Zoots putting on their very best manly man poses. I hope you like it. There was a video too but I think someone may have deleted that.

We left the beach in search of Pizza. When in Italy, everyone must have pizza at least once. It’s cheaper than pizza everywhere else and is particularly delicious. Italy is where pizza was first born so they know what they are doing. When they cook pizza in Italy the chefs have to say ‘Pizza Pizza’ in an Italian accent. That is what makes the pizza so delicious. That and the wood-fired ovens. You have to pick wisely where you choose to have your pizza as some are tastier than others. We almost got tricked into stopping at a not very nice pizza place as we were so hungry but we kept on walking and boy were we rewarded! After our pizza, it was nearly time to go home. We walked around Salerno feeling full and happy and content. We liked Salerno a lot!

Love from, The Zoots  x

Later in the year The Zoots are appearing at The Royal Theater, Marine Theatre, Cardiff City Stadium, Wellington Barn, Bray, Oxford, Priston Mill,  Santorini, Bristol, Orchardleigh, Kent, Lisbon, just many of the reasons you should book The Zoots.