The Zoots perform at Liz & John’s beach wedding at The Gallivant Hotel, Camber

It’s 9am, we’re up early, bound for Camber! Today is the 11th of October (*cough* my birthday), the day of Liz and John’s wedding! Coffee is the drink of the morning, and lots of it following our gig in Plymouth the last night. A gallon of coffee, a few glasses of juice, a couple of boiled eggs and a bowl of porridge later, we’ve jumped in the band van and were raring to go! It looks kinda rainy-sunny-rainy-sunny. It’s just Zoots lead guitarist Ben, Jamie & I this morning. Wiltshire wedding band Drummer Mike and Bass player Stuhoney will be joining us later on for the evenings celebrations.

Liz and John got in touch in April, finding us on Google! Liz and John are fans of sixties music so we were a perfect match; knowing a huge amount of sixties songs as well as loads of other music too! Liz & John Have been great to liaise with from the start, they’ve had a clear idea of how they wanted the day, and what they would like in the way of music. The seaside wedding sounded like great fun, with plans for an acoustic set on the sand dunes (weather permitting) before the evenings entertainment…ENTER Wiltshire wedding band ZOOTS! Liz asked early on if we would be able to perform an acoustic set during the daytime…we said yes! Looking for something on a smaller scale, Ben & Jamie were the ideal for the task, but more about that later.

We arrived around 1pm. We knew we were close to the beach as we could hear seagulls, sea (see) sand, and could smell that beach-y seaside smell. Growing up on a small Island (The Isle of Man), I love it as it reminds me of home! 😀 Set back from the main road stands The Gallivant Hotel. Beautifully modest and charming, this unique seaside wedding venue is unlike any other we have ever played at. Garnished with seaside bits and bobs throughout the place, as well as the calming blue hues here and there (not to mention the roaring log fire and so-comfy-you can’t-get-up sofas), you couldn’t help but feel cosy, calm and snug wherever you went!

The main room was in the main building was to host the wedding ceremony and evening celebrations. The Wiltshire wedding band drinks reception was to take place (weather permitting) on the sand dunes, and if the weather was not permitting, there was a lovely wee terraced area just outside of the main area. Only the time and the weather would tell. My favourite room was the marquee just off the ceremony room. This was the wedding breakfast seaside room. I may have got a little carried away with the photos…(sorry)

The drinks reception wasn’t due to take place until 3pm so the room was set out for the wedding ceremony which was scheduled for 2pm. Liz & John had had a last minute brilliant idea, they would like Jamie to sing a song during the ceremony and get their guests to sing-a-long too! The couple had chosen “All You Need Is Love”. Jamie had rehearsed the track so he could perform it with his acoustic guitar, encouraging sing-a-longs on the chorus. Ben and I could only hear the ceremony from the wedding breakfast room where we were sitting – it sounded brill! Everyone was singing-along during the choruses. Liz & John had taken the time to print out the lyrics so everyone knew what to sing and when. Shortly after the ceremony, the guests filtered outside, where it was (hurrah) not raining but the sky was telling a different story…

A bit like most of the day, the sky was on and off sunshine! Whilst the sun was shining upon us, the guests dashed off to the sand dunes for some photos. I can’t wait to see these, I’m sure they will be wow! Jamie & Ben got set up ready to perform on the terrace. Although the weather was currently sunny, the hotel thought the terrace would be best for the music. We’d come prepared with portable amps and acoustic guitars, ready to perform wherever the weather allowed.

Ben and Jamie got set up and ready to perform as soon as the guests came back. The Gallivant prepared some delicious snacks and drinks for the wedding party.

Slowly at first, and then very quickly as it began to rain, the guests began to arrive back at the hotel! Some dashed back to their rooms to wash their sandy feet! I loved how there were loads of Flip Flops out at the front of the hotel for guests to use! Jamie and Ben began their acoustic set. It was lovely. The both sound so brilliant when they harmonise together, both vocally and with their guitars.

It was 5pm when the days schedule took the guests into the main marquee room for the wedding breakfast. This was our time to set up for our evening performance. Mike and Stu joined us, having made their way over from Wiltshire that afternoon. As fresh a daisies, they were raring to go and they brought the sunshine with them…

We set up quickly and quietly in our space, conscious of the wedding guests next door! Before soundcheck we sat down for a bite to eat and a much needed cup of tea which Liz & John had kindly arranged for us – thank you very much!

At 830, we were fully sound-checked and ready to go.

Zoots Bass player, Stu was DJing for the evening. He kicked the night off for Liz & John with their first dance, “Bring Me Sunshine” by Morecambe & Wise. What a lovely song for their first dance! Liz & John looked so happy dancing together in front of the huuuuuge L & J which had been installed as we set up. We began our first set straight after. It was brilliant. Highlights included: I’m a believer, Really Got me, All Day & all night, Saw Her Standing There, Get It On, Crazy Little Thing Called Love as well as a rubber penis in my cowbell (a stray photo booth prop I assure you). Following a quick break, and DJ Stu hitting the decks, we were back on for some more. Highlights in a ‘break-dance’ routine, lots of singing-a-long in and out of tune, dancings, moving, shaking, bopping, rocking and rolling. It was immense. You guys were awesome!

Thank you so much to the gorgeous Liz & John for choosing The Zoots as their wedding band. 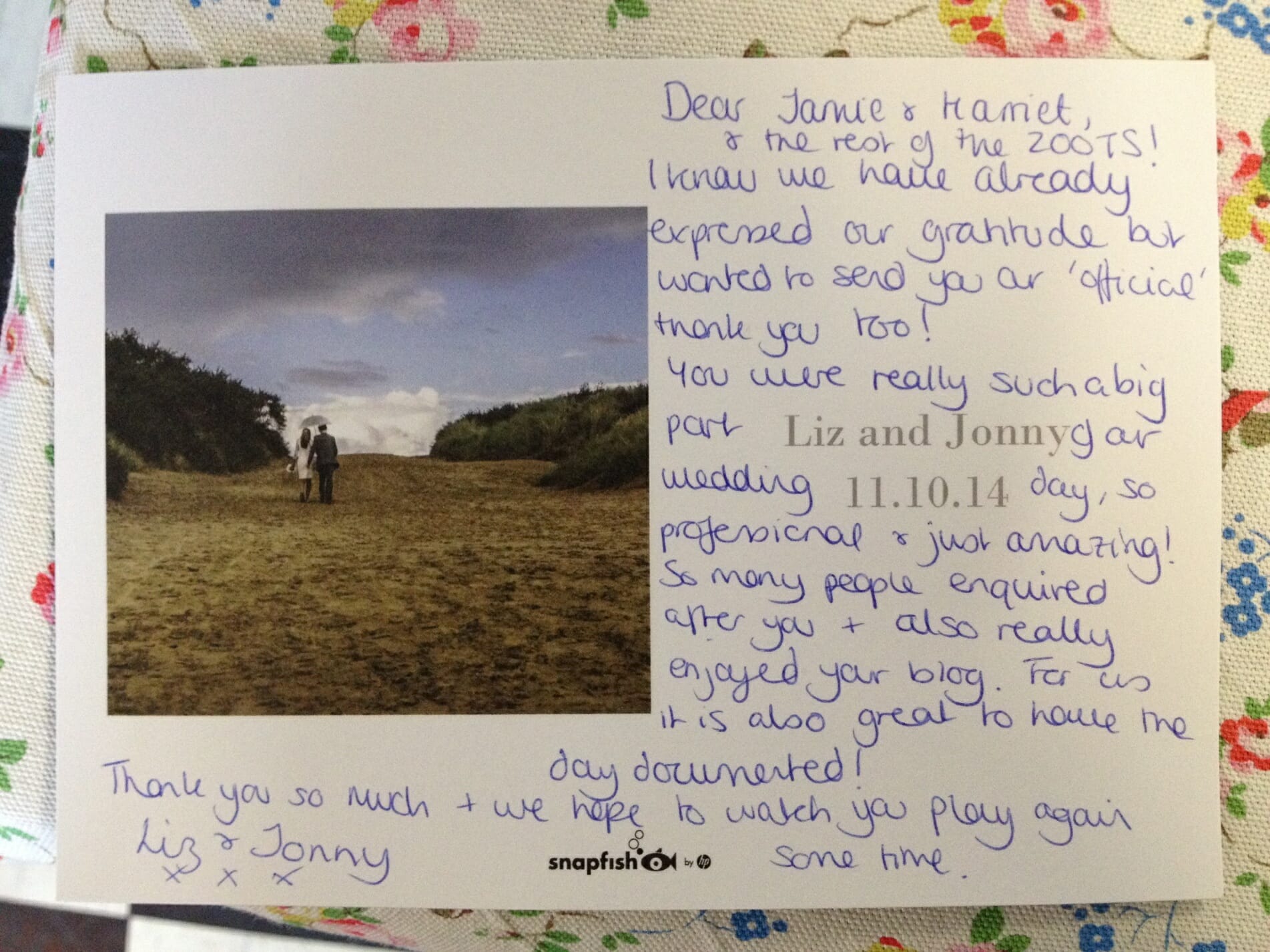