The Zoots perform at Jenny & Alan’s wedding at Cambridge University

Let’s journey back to Friday the 4th of April 2014. We are in central London, Knightsbridge to be exact, performing for those crazy cats at the Royal Thames Yacht Club for their younger members ball. It is one of those ‘crazy crazy nights’ (thank you KISS) and the crowd are loving it. Not just ‘sorta-kinda-giving-it-a-go-shufflin’-those-feet’ but really LOVING IT. Bodies are bopping, arms are a-waving and sweat is a-pouring. It was brilliant. Made ever more hilarious as it was a masquerade ball! In amongst the throngs of people, bodies, drinks and masks were Alan & Jenny. Bride & groom to be. As we were recovering (packing away) they came up to us and asked us to be their wedding band. We said yes!

20th of September was the date of their wedding, and Emmanuel College at Cambridge University was the place! We set off early, leaving plenty of time to tackle the M25 if we needed. Lady luck was on our side and the traffic was good. We were really excited to be performing for such a lovely couple. We’d been in touch with Alan frequently in the run up to the big day, discussing timings, logistics, song choices and all things wedding!

We arrived at the college and we were blown away. It was amazing! The buildings exteriors was just fantastic. We were greeted by a cool jazz band, performing outside as the couple had their drinks reception and photos on the lawn. I loved the little touches like the bunting everywhere! We had a look around and gathered our bearings. Zoots bass player Stuart did his best to look studious.

We located ‘The Old Library’, our venue for the night. It was like stepping into a Harry Potter movie. Wooden floors, really really really old portraits of what I can only assume are really clever, well known famous scholarly types. And our stage was just lovely! The bunting, wild flowers and photo’s of Alan & Jen dotted about we’re fab! They also had a pic ‘n’ mix table, complete with WHAMS (remember those?), dolly mixture and cola bottles! The couple had even provided a basket of flip flops for their guests to use during the evening. Genius! There were a few small tables in the room with some chairs running the length of the hall. This really was brilliant planning and great use of the space, leaving a large enough dance floor, but also providing enough seats for guests to rest their weary dancing feet, without having lots of large tables taking up the space!

Our stage was a great space, big enough for all of us, and the grand piano in the corner! Zoots bass player Stuart was DJing on the night too so we made sure he had enough space to put out some awesome tunes during our break!

Set up and sound check all happened so fast. Alan & Jenny popped in to say hello and have a practice of their first dance. It was so lovely watching them dance together in their rehearsal, we felt very privileged to watch the new husband and wife rehearse their first dance together. I just loved Jen’s dress, the way it moved when they were dancing.

Before long it was time to begin! The wedding breakfast was taking place in a separate room, so we got set up and ready to perform for when the couple and their guests came into the evening reception room. We had a moment to do a pre-gig band selfie. Unfortunately we failed to take into account the lighting situation and first attempt resulted in this: Second attempt was a lot more successful, although Zoots drummer Mike was slightly miffed he didn’t make the cut.

Before long it was time for us to start. Alan & Jenny began the night with their first dance, “Come Away With Me’ by Norah Jones, played by DJ Stuart. It was just beautiful. We took some photos of their first dance:

And then we launched into our awesome first set. Alan & Jen had chosen some wicked tunes from our song list for us to play. We included these in our set and added to them with classics which we know everyone would enjoy. Some highlights included: Get Lucky, Beggin, No Woman No Cry, Billie Jean, Don’t Stop Me Now, Place Your Hands – SO MANY GREAT SONGS! The two sets when so so quickly! Was great to see Will & Sophie there too from The Royal Thames Yacht Club, bopping the night away! Stu Dj’d during our break. I don’t think Alan & Jenny’s guests stopped dancing AT ALL. There was some awesome dance offs, some moves we’ve never seen before! Loved watching the wigs and the hats do the rounds too! It was so brilliant. The crowd went totally wild. Here are the photos!  There were a few guests who were at The Royal Thames Yacht Club.

It was such a brilliant night, really great to meet Karen & Doug at Howell Photography too who took some totally amazing photos. We met them at Chaffeymoore too. You can have a sneak peek of some of the photos over at their website! Thank you so much to everyone we met and the wonderful comments, we had such a brilliant time performing for such a wonderful couple. 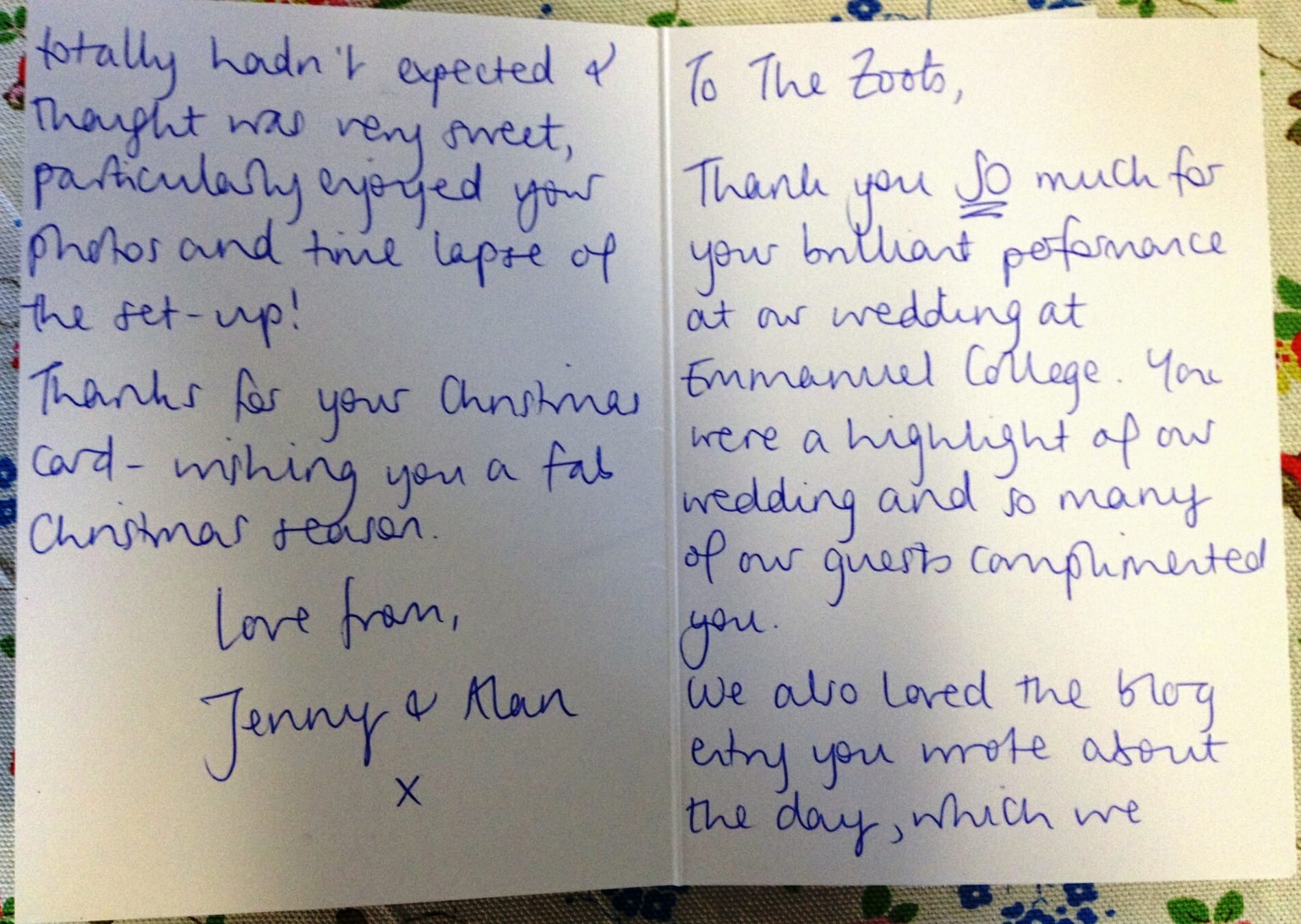 In the near future The Zoots will be playing at The Clifton Arms, Pangdean Barn, Wantage, Priston Mill as a wedding band, Celtic Manor band, Longhouse, Bonhams Barn band, Reid Rooms, A wedding band in Wiltshire, wedding entertainment in Dorset, xmas party band, Orchardleigh, The Zoots will also be performing in Marlborough for Halloween.