The Zoots perform at Goodwood Revival

“The Goodwood Revival is one of the best motorsport events anywhere in the world. It attracts crowds of 150,000 immensely enthusiastic people, most of whom come dressed in period costume – Goodwood’s aim with Revival is to recreate the circuit’s glory years, between 1948, when it hosted Britain’s first post-war motor race at a permanent venue, and 1966, when Freddie March deemed that cars and racing had become too fast for his track.’ – http://www.telegraph.co.uk/

We’d been looking forward to performing at Goodwood from the moment we’d been booked. As it was a vintage festival, we’d be performing our 1960’s show, which is so popular at the minute. We just love it! I love getting dressed up in the sixties outfits, and sixties style make up. We were up and out early. I was pleased to see three of the boys had received the checked shirt and sunglasses memo.

As we crossed the threshold into Goodwood, we left behind all that we knew of 2016, and dove headfirst into history. Vintage outfits, cars, costumes aeroplanes, it was spectacular. The sky was clear and we enjoyed watching the planes soar over head and the sun beat down on our faces while we waited in the car park.

Due to the vintage-ness of Goodwood, we weren’t even allowed to take our 2009 Mercedes on site to load in as it wasn’t a vintage vehicle! So instead, we took loaded our equipment in to this! 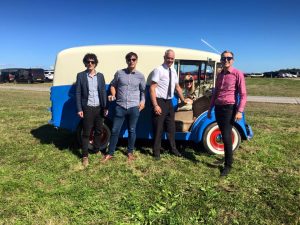 Glyn, the owner of this pretty amazing vehicle drove our equipment to the ‘Doom Bar’, where we would be performing later, and went on foot to meet him there. We saw some pretty wicked cars along the way!

We arrived at THE DOOM BAR and met up with Glyn so we could unload the van and begin set up and sound check. I was so impressed by the outfits, I didn’t really appreciate that pretty much everyone would be dressed in vintage. It was all so authentic too! I loved and began to wish we’d arrived 3 hours earlier! 😀

We set up and sound-checked. Dan’s double bass was very fitting for the event! The Doom Bar was such a cool space, we were looking forward to performing here in a couple of hours..

Car fan and drummer Simon, took these pretty awesome photos of these cars after sound-checking. We had a feeling that we saw as we looked very briefly around Goodwood, was just the tip of the iceberg!

There was so much going on, all so vintage. I just LOVED the vintage fashion, items from every era, it was like stepping back in time. There were so many cool vintage shops and entertainment happening all around us.

This barbershop quartet which we spotted on the way round were brilliant:

There was a tug of war taking place, big screens where you could watch the races, and some amazing food stands which had everything from halloumi to hamburgers.

After a bite to eat, we headed to our porta-cabin to get changed and warm up. As we did so, we were lucky enough to meet with Elle & The Pocket belles, who had been performing every day during the festival. They were so so lovely, and had a wicked style and awesome vocals.

Before we knew it, it was time to go on! We were really looking forward to performing the set, which was crammed with as many songs from the sixties as we could possibly fit. 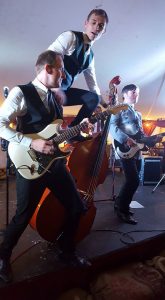 Love these photos from the show, some of which were kindly sent to us afterwards!

We put in so many brilliant songs from the sixties, The Beatles, The Kinks, The Who, The Monkess – loads!

It was over before we knew it, and we had the guests shouting for more, quite literally…

We had such a brilliant time being part of Goodwood festival and would just love to come back next year. Huge thanks to our lead guitarist Ben, drummer Simon, and bass player Dan, who are just brilliant.

Thank you everyone who came down to watch us, and for your lovely comments. Thank you to Matt for booking us at Goodwood.

If you’ve never been to Goodwood, we suggest to put this on your bucket list, as it was incredible. We left wishing we’d arrived three days earlier. This article from The Telegraph is quite a good write up about what to expect at Goodwood.