The Zoots perform at Ben and Vicki’s wedding

Vicki is my one of my cousins so I was over the moon when Ben proposed to her! Vicki and Ben have travelled all over the country to see the band and are fantastic supporters of the band. Ben has even performed with the band although he was dressed as a ghost that day and said his name was Steve. Ben is a fun guy and I think his performance with The Zoots in this pic below sums up what a great guy he is. 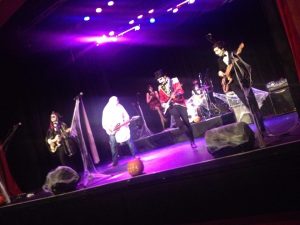 Vicki on the left, Ben at the back, Amy and Christine have been coming to see the band for about five years now and Ben told me in private about four years ago that one day he wanted us to play at his wedding, even though he hadn’t asked Vicki!


It was so nice to part of the wedding and we were very grateful to be part of the day from start to finish. As we had suggested the venue to Ben and Vicki we were pleased to see it looking so good. There were some great touches and the family had obviously worked hard to make the venue look so pretty.

After the speeches we started setting up the drums and all the equipment and the best of the boys arrived.

Ben and Vick’s cutting of the cake was brilliant as it involved a crossing of swords.

It was an awesome night and also very emotional!

The lovely couple Vicki and Ben!