The Zoots perform at The Broadway Melodies Theater

Ok, so we’ve been back three days and I think we’ve just about recovered from what must have been our BEST Sixties Tribute shows ever, on board the Rhapsody of The Seas.

It began at Zoots HQ in Wiltshire of course, where most of our stories begin. We’ve had a busy few months performing at lots of events including Natalie & Rhys’ wedding, our awesome halloween show at Stamford Corn Exchange, as well as lots of other performances we just really haven’t had the time to tell you about. You may remember from our latest band blog post, we’re moving house, as well as having a full diary of performances and taking bookings well in to 2017, we’re pretty busy! So if you’re thinking about booking The Zoots, we’d recommend getting in touch asap!


But enough about that, let’s get back to where we were a week ago…It was a fairly early start as we made our way to Heathrow to catch our flight to Malta! The Zoots have had some pretty awesome adventures this year, but Malta was a first for most of us. We were a pretty even mix of happy, hungry and tired by the time we arrived to the place of planes. We said hello to the big red horse and tucked into some grub.

Before we knew it, we were on the plane, soaring through the air and touching down in Malta! We didn’t have much time to look around Malta before getting onboard, but it looked amazing! It’s firmly on our ‘places to visit properly’ list.

We had an evening to rest before our show the following day. We were really excited about performing in this amazing theatre. We set up and soundcheck the songs, all ready for our Sixties Tribute show that evening. It was so great to work with such a brilliant team. Stage manager Robb, sound tech Robert, lighting extraordinaire Clyde and Eleanor in the wings. What a dream team. It’s such a pleasure to work with such an experienced team who help us with all aspects of the show. The equipment they use is brilliant and we always know our sound will be fantastic. 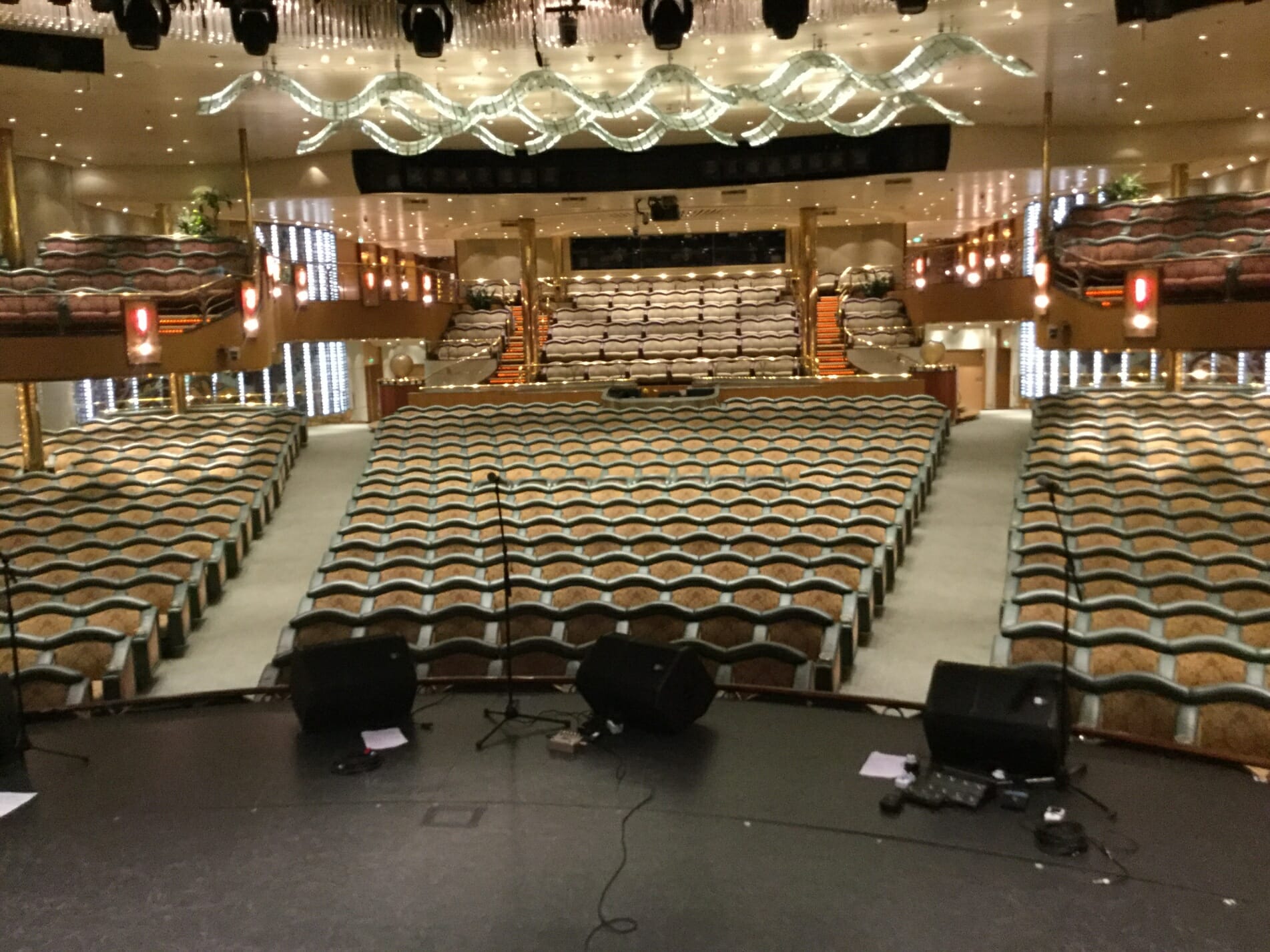 Sounds of the Sixties tribute

After soundcheck, we had an hour or two before the shows. You can fit around 900 people in the theatre, so we were looking forward to entertaining the crowd in their hundreds! We knew there were a lot of guests from every nationality, so we always try and tailor our show to be as universal as possible. Choosing songs we know everyone will know and love. Before we knew it, we were backstage, waiting for the curtain!

And we were off! What a set. We played so many fantastic 60’s tunes. The Beatles, The Kinks, The Rolling Stones, Roy Orbison…there were loads! We absolutely loved it. I wore my brand new 1960’s boots, made by a shop in England, called Madcap. They were great and looked fab! The show went so quickly, everyone was up and dancing. We had an encore and a standing ovation! Here’s the moment we finished and came back on stage for a bow! It was the best feeling. We were really happy Zoots!

After the show, we went outside the theatre and met with lots of people who wanted to talk to us and have their photos taken with us. It was so great hearing such wonderful feedback from a brilliant show.

After meeting the guests, we headed back into the theatre to pack away our belongings and pass our thanks on to the team. We then headed out to debrief and wind down. What a night it was!

After what was one of the best shows ever, we headed back to our rooms for the night. 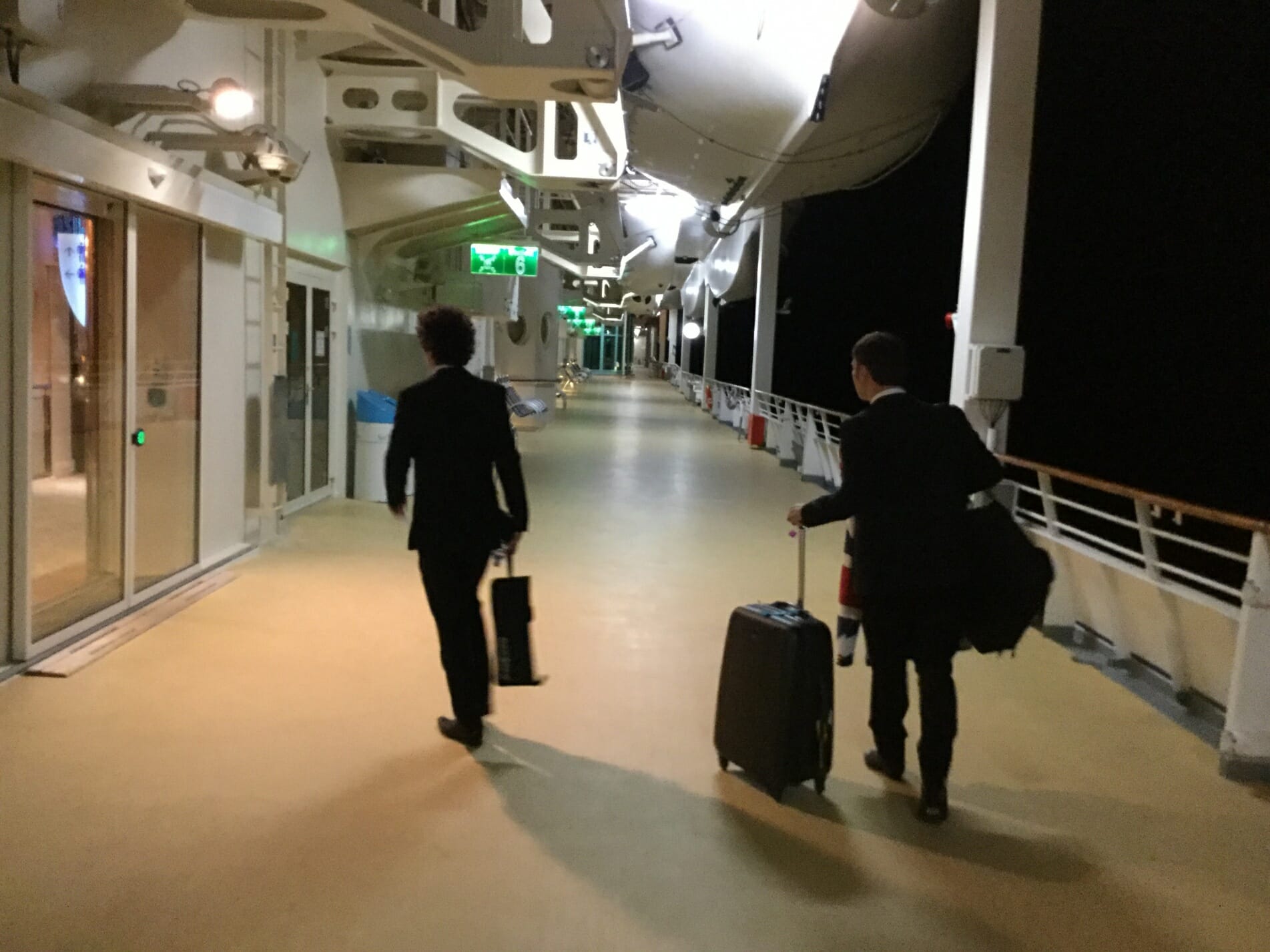 Thank you so much to everyone who came to see us on board the Rhapsody of The Seas.
Did you see our show? Please do get in touch with us and send us any photos you’ve taken, or just say hello!
Have a read of some of other blogs about what we got up to off stage…

Lots of Love from,