The Zoots and their first Saga cruise performing with their 1960s show!

Hello early morning Sunday. And it is very very early for us, or indeed anyone. We had a super time last night performing for Amy & Ian’s on their wedding day at the Assembly Rooms in Bath. It really was brill. We arrived back to Zoots HQ at around 2am and began to prepare for the next adventure…France! And we’re leaving in a matter of hours. We packed and packed and checked and checked again. We did it all. Phew. We could have 2 hours sleep before our taxi was due to arrive. TWO. Or ‘none’ hours sleep was the case for Zoots lead guitarist Ben. We were tired sleepy grumpy bed hair heads when 6am came and our perky taxi driver greeted us. Ahead lay a 3 hour journey to London Southend Airport. We live in a village called Southend but it is a different Southend!!

Ah, London Southend Airport. It sounded so exotic. The three hour journey dragged somewhat. We tried to sleep but were fearful of what the others may do if we shut our eyes for only a moment. We saw the sunrise out of the windows of finger-streaked Renault Espace people carrier as we trundled along the eerily quiet motorway. We stopped at a service station, unsure what we really wanted. Were we hungry? Were we thirsty? Or just plain tired? None of us really knew. So I bought a tea and a gallon of orange juice. We ventured on, hardly having made a dent in this epically early journey.  We traveled in silence for quite sometime. Through the silence I could sense the excitement everyone was feeling as we drew closer and closer to our destination. At long last we were here. We were so excited (and tired) we tried to play our guitars without taking them out of their cases. We looked so cool. 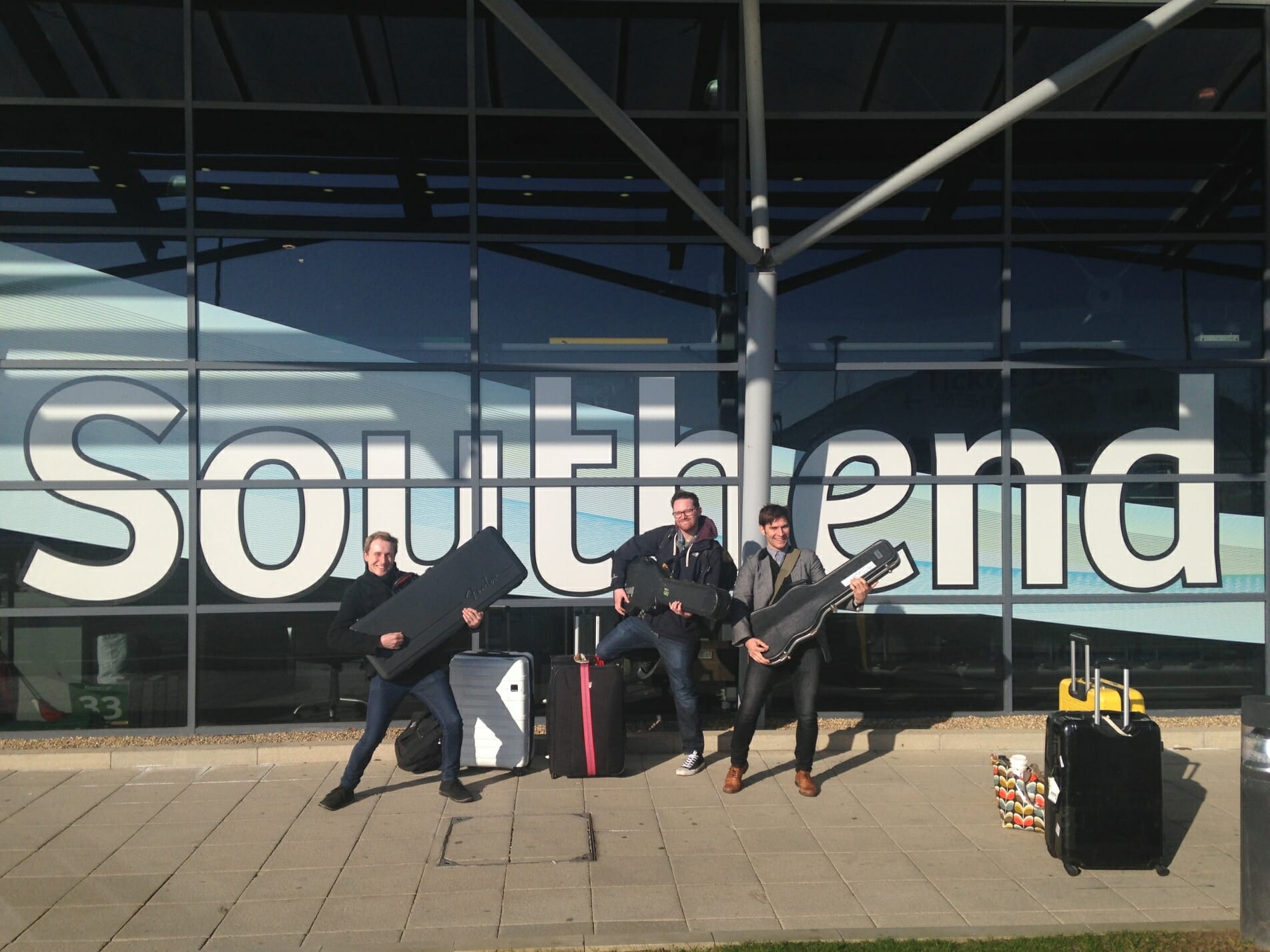 We checked in and walked around a bit. Fortunately we don’t have to take all of our band equipment with us when we travel, just our clothes, guitars and hairbrush and stuff The airport was small. There was a small shop, a staircase, a cafe, a toilet, a bin and a runway. We were very tired. We made use of most of the facilities except the shop.

The plane was purple and had propellors. We boarded, our eyelids heavy and brains tired. We fell asleep almost instantly. We took off in to the great wide open air which surrounded us. Two French girls sat behind us pointing out the parts of London (Essex) they could see as we flew high above the London (Essex) skyline.

The flight passed without event. We brought sandwiches with us as they aeroplane company wanted £7 – £10 for some bread with ham in between. We ate our sandwiches when we weren’t sleeping. A few hours (or minutes, I forget) later we landed smoothly on the land we call France. The grass was greener than that we had left back in England. We got off the aeroplane and breathed the French air. It tasted distinctly of fresh bread, cheese and garlic. I already loved the place. Oui oui!

Still rather tired from the early start, we used our sleepy eyes to spot our bags when they arrived (and they did arrive- hurrah! we cried a bit with happiness, remember the time when they didn’t Air France, do you? DO YOU?!) and we then used our eyes to spot our next taxi driver, another perky chap, er…sorry, ‘Monsieur’. He was to take us another 3 hours in a vehicle to our destination, Cherbourg, France. Pronounced ‘Sherborg’ in French. The car was similar to the other one which we had spent many many many hours in just hours earlier. It had seats, windows, doors and seat belts. The only real difference was the driver, he was French. We chatted a while, trying hard to figure out exactly what he was saying. The ‘conversation’ soon moved on to music, quite the universal language it would seem. Our driver was particularly fond of the ‘Rocky 4’ sound track.

Below are 4 photos taken in the airport in France, outside of the plane and in our second taxi of the day. We are smiling as we’re a bit delirious. Conversation with our taxi driver soon dried up once we’d exhausted Rocky 1, 2, 3 and 4, and we reverted to silence.

Zoots bass player Stuart spent most of the time listening to music on his headphones. We spent some time guessing what he was listening to, we were almost nearly right.

We arrived at our hotel. We were beat. Spending time sitting in various vehicles is tiring! We planned to rest a while before heading into the local town to get something to eat. We went to our rooms and looked out of our windows, there was a marina. It was nice. After an hours nap, we decided to have tea, (that’s dinner) in the hotel, our poor legs and brains couldn’t cope with going outside.

Here are some photos of the hotel:

Dinner was lovely. Mike, Zoots drummer, put his French to excellent use, acting as translator in all of the negotiations. Dinner was an absolute delight. Ben and I had omelette. They were delicious. I can’t remember what everyone else had, I’m sure it was good though. We ate and ate until we could eat no more. We felt full but good and retired to our rooms. I watched a bit of Lord of The Rings in French before going to sleep. It was interesting to hear Gollom’s creepy wee voice in French, they portrayed him very well. But enough of that, and off to sleep! Tomorrow is a big day. Tomorrow we were meeting the Saga Cruise Ship we were performing on.

Breakfast was immense. The french know how to do a good brekkie. There was bread, such delicious bread. And jam. And fresh juice. And eggs. And yoghurt. And tea. And ham (if you like ham). And fruit. Oh it was lovely and set us right up for the day ahead. Below are two photos of breakfast and one photo of the boys outside the hotel.

Onward to the ship! I took below of the boys when we arrived. I was really very pleased with the photo. The composition is really quite good and everyones hair looks alright. If you’re on Instagram, we sometimes put photos on there.

We boarded. It was all new, we were excited. We were shown our rooms for the next two nights. We checked out the ship and where we performing later on that evening. Before we knew it, it was time for soundcheck. I didn’t really take many photos here. Soundcheck was good and the team were very helpful. It was the first time they’d had a guest band on board so we had to spend quite a bit of time working things out as the equipment was a bit different to what we were used to. It was all OK in the end and we left happy and looking forward to the performance.

We’d spent a long time working out what songs to perform for the evening, making sure there were songs everyone would know and love and enjoy dancing to. The cruise was 60s themed so we had loads of songs to choose from.

We spent a few hours wandering around the ship and meeting some of the guests onboard. The ship was smaller than ones we have performed on before. This was actually really nice as we got to meet a lot of guests and crew who were super friendly. Before we knew it we were on! Here are some photos pre curtain.

The curtains opened and out we came. Greeted by 200 or so expectant faces. We began. It was immense. We crammed so many hits from the 1960s into our hour long set. Two songs in and the dance floor was FULL! It was immense. We played Roy Orbison, The Beatles, The Rolling Stones, The Kinks, The Who…LOADS OF SONGS! After the show, lead guitarist Ben met with his fans who had camped out overnight to have a photo with him.

The following day we were in France. I can’t remember the name of the port but it was cold, not warm like you’d imagine France to be. It was cold cold cold. I took only four photos as it was cold.

Turns out the show went down so well last night, they wanted us to perform again! Yes us!  The Zoots headlining 2 nights in a row! We were pulling out all the stops. This included our BRAND NEW (kinda) outfits. Look at us. We even ironed them. Look how different we look.

Show two was fab! Two coach loads of guests were delayed coming back from Paris and they were thoroughly upset to have missed our second show.  This show was full of some more awesome songs from the 1960s. It was such a good time for music, there are soooo many good songs, we just love performing them all! And of course songs from all the eras.

It was such a fab couple of days. It was so brilliant to perform for Saga and meet so many lovely people.

Thanks for having us!

Love from The Zoots