Way back when The Zoots performed at The Alhambra theatre  we met the lovely Woodley family after the show. Many months later little did we know, Alison Woodley was planning and hosting events to raise money for the NesT charity. Alison’s aim was to raise £2,000 for eight year old Daniel Bull who she looks after at Little Pickles Playhouse. Daniel suffers from Nephrotic Syndrome, the condition (NS) affects approx 10,000 people in the UK, majority are children, with no known cause or cure. The current treatment is non-specific, with many potentially life-threatening complications. NeST funds Bristol Children’s Hospital in researching NS to find a cure.
Alison contacted The Zoots to see if we were available to entertain the guests at the charity fundraiser at Little Hadham Village Hall. We were honoured to be asked and jumped at the chance to be involved.

Early Saturday afternoon on the 16th of May, The Zoots band ventured in the White Knight tour bus round a free flowing M25 and arrived at the village in Little Hadlam to glorious sunshine! We were even lucky enough to meet Daniel Bull very briefly before he returned to hospital.

Alison and all the team had worked really hard to decorate the hall and it looked really nice. We loaded in our equipment and set up the stage ready for soundcheck. It was great to hear Dan Gill play the double bass on his very first gig with the band. He travelled all the way from Wolverhampton and took on all of the main backing vocals too.  Here’s a video of  Dan sounchecking

We ran through a few of our medleys which are quite complex and now most of our performances include about 50 songs from our repertoire. Andy Wilder from Reading who played with us at Phil and Rainee’s wedding joined us again on drums.

Alison arranged a nice dressing room, with a heater, a table and a few chairs, there were also a few kids chairs which I realised ‘after’ I sat on one. Harriet however had already snapped the slightly embarrassing moment. Alison provided us with a lovely platter of food including prawn cocktail, cheese and ham sandwiches on brown and white bread, tortilla chips, a delicious bowl of salad, water, tea and coffee. It was very much appreciated, after a long journey, set up and soundcheck, it was exactly what we needed. We got changed, chose a pair of Zoots boots and got ready for the first set.

After a few attempts The Zoots had some pictures taken with Wayne, Jess, Alison, Shannon, Liam, Hayden, Colin and all the fund raising team who really worked their socks off to put on such a brilliant event.

We performed our first set and everyone was up from the start. We were the party band Hertfordshire! We started off with songs from the 1950s, then some songs from our 1960s show and ended the first set with some 1970s classics. I went in the audience and stood on a chair with my guitar and posed for a few photos.

In the break Alison raffled off loads of goodies in aid of the charity. There were three tables worth of amazing prizes to be had. Meanwhile, The Zoots had a quick cup of tea and a sandwich. Shannon got up on stage to say a few words with Jessica, Hayden, Wayne and Liam. Meanwhile the bar staff were working non stop.

We started the next set with Footloose and everyone was up on the dance floor again. We played hit after hit non stop from the 1980s, 1990s to present day. Neil Thom was back on stage after a long break and he was very popular with the crowd. He has performed at 10 shows with The Zoots at The Alhambra Theatre where the Woodley’s first met us. It was Neil’s first show with us for a couple of years and he slotted in brilliantly. Read more bout Neil here.

We were lucky to get the very talented Symone Venables to sing Valerie with us on the night:

I then stayed in the audience to sing Wonderwall by Oasis The night continued to get better and better and there was a wonderful feeling in the room. The penultimate song was Mr Brightside which Neil played on the steps.

We met so many nice people after the show and it was so nice to hear lots of encouraging words. I was most pleased with Colin’s comments when he said we were even better than he saw us the first time. We signed a card and Andy signed a drum stick for Danny. 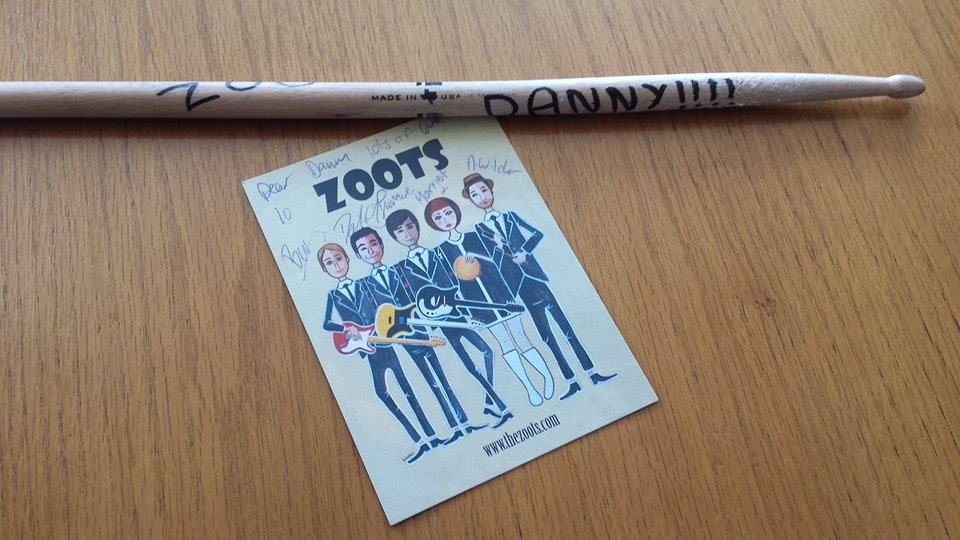 Thank you so much to Alison, Jessica, Shannon, Liam, Hayden, Wayne, Colin and everyone we met who made us feel so welcome and looked after us so well. We were very proud to be part of a wonderful event and wish Daniel Bull all the best in the future.

At the writing of this article Alison and her team have so far raised £5,810!! An up to date ammount is listed on the NesT website where you can also make a donation. Please click here if you would like to contribute.

Thank you so much to Neil Thom on guitar, Harriet Lowther on percussion, Andy Wilder on drums and Dan Gill on bass who played his first gig for the Zoots and took on all the backing vocals too . They all did really well and helped make the evening a real success.

Thank you for reading