The Zoots perform at Opp’s New Year Party at the Randolph Hotel, Oxford

On the 22nd of January 2016, we performed our first UK gig of the year for Opp’s New Years party at The Randolph Hotel in Oxford. It was brilliant! We were the party band in Oxford.
OPP has 25 years of experience in personality assessment and bringing psychological insights to the workplace, find out more about them here.

Emma was in charge of booking a band for the bash, and she chose us, having been her wedding band a little over a year ago! We remember the night well, in the gorgeous setting of the Crazy Bear in Stadhampton (you should really go there, it’s amazing).

We enjoyed our short drive to Oxford. Spirits were high as we left our new Zoots HQ in Wiltshire. We were really excited as it was our bass player, Tommy’s, first performance. We’ve known Tommy a while now, and have spent these past few months rehearsing our repertoire with him, so we were really excited to be performing with him this evening. Not only is his an amazing bass player, but he can also play the drums, guitar. His vocal ability knows no bounds, his energy and enthusiasm will ensure he fits in really well with The Zoots team! 😀 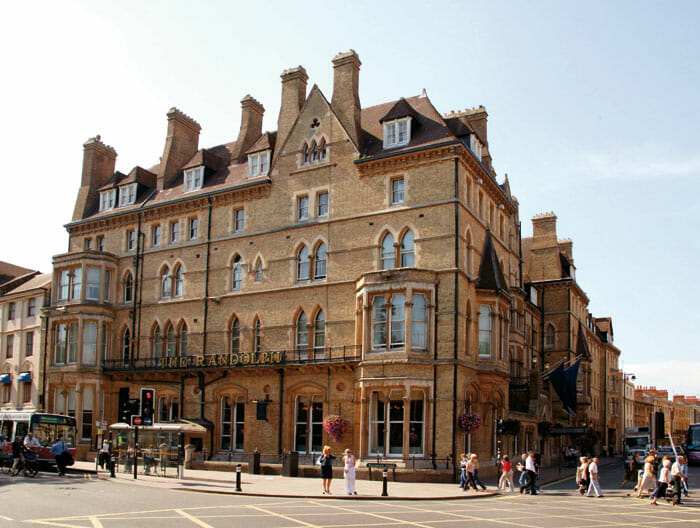 The Randolph Hotel was every bit as amazing as we knew it would be. The hotel featured in the Inspector Morse television series several times, in particular in the episode entitled “The Wolvercote Tongue”. The cast stayed at the hotel during filming in 1987 and there is now a Morse Bar.[1]

After setting up we enjoyed looking around the hotel, especially enjoyed the photos of all the famous people who had stayed there. I enjoyed learning about the paintings in The Drawing Room at the Randolph Hotel, as I was told the paintings told a story, based around a poem. The story of a very beautiful lady, who all the men wanted to marry. I wont spoil the story for you, but do pay close attention to the paintings on your next visit, the poem which inspired the paintings is on the wall in the Drawing Room.

The Drawing Room was the very place where we would be spending a few hours before our performance. Emma had really kindly arranged for us to have some food, which we were able to order of the mouth-wateringly delicious menu. It was fabulous and we were left feeling content and ready for the evening ahead being the party band in Oxford.

Many thanks to Sean and the team at The Randolph Hotel for looking after us so well! After a quick change into our outfits, we were ready for the evening: And we were on. Thanks so much to Emma & Andy for the photos they’ve sent to us:

Party band at The Randolph Hotel

We performed lots of songs from our repertoire which went down very well. Everyone was dancing all night, and there was even a limbo at one point. After a quick break to catch our breath and have some water, we were back on to bring the evening to a close. It was brilliant.

Thank you so much to Emma for booking us for their band for Opp’s party. And thank you to the team at the Randolph Hotel for looking after us so well.   Love from, The Zoots

Emma said:
“I just wanted to drop you a quick note to thank you again for Friday evening.  You guys were amazing and even better than I had remembered at my wedding last year.  I’ve had a load of colleagues comment on how fantastic the band were, a big hit!  I’ve left a pile of your fliers in the office kitchen as a few people had asked for your contact details. One very happy customer!”
Read more of our testimonials here.