Thursday 20th of February 2014 was a very special night. It was the night which we, The Zoots party band in Oxford, met Great Gatsby for Oxford Brookes Winter Ball, at the very amazing Oxford Town Hall, performing to over 500 music hungry students. We smashed it!


The event was booked following our performance as Jamie & the First Class at The Angry Birds Go Launch Party in 2013 at the very cool Varsity Club in the centre of Oxford. It was an absolutely brilliant night, Angry Birders everywhere!

Bass player Stuart Morrell grew a very 1920s moustache for the Oxford Brookes event, spending just over a week encouraging and nurturing the very best beard growth. We sourced the most Gatsby-ish bow ties and suits and I found a very cool red and black flapper dress, and 1920s shoes (thank you Etsy!)

In preparation for the night, we had lots of rehearsals, practicing some wicked new songs. Which included Stu’s vocal debut in our version of ‘Happy’ by Pharrell Williams. We also mastered our very unique version of Billionaire by Bruno Mars, I Need a Dollar, sung by drummer Mike and Get Lucky by Daft Punk. We were so excited to perform the new tracks and they sounded absolutely amazing on the night.

Oxford Town Hall was such a ‘wow’ venue. It was stunning! We arrived at about 3pm, to set up and load in. We were met with a team of people working hard to transform Oxford Town Hall into Gatsby’s mansion. We set up on an amazingly huge stage, with an organ at the top! We had a great view. We took a long time to soundcheck, as we had to take into consideration the room which although currently empty, would soon be filled with 500 bodies, altering the acoustics drastically. We spent a long time making sure it sounded perfect. 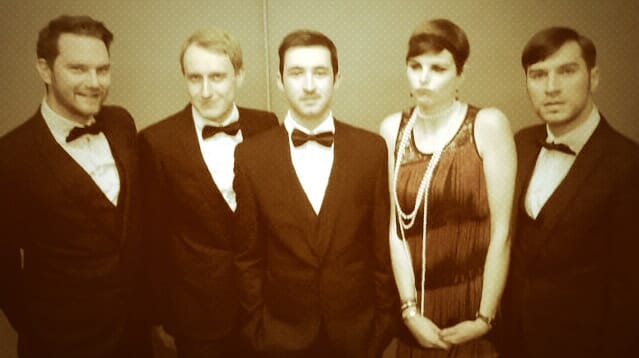 At 730 the doors opened and guests poured in, welcomed back to the roaring ’20s with a champagne reception! There was a casino room, cocktail bars, paparazzi photos and food stalls!  Everybody had made such a huge effort to dress up. They looked amazing! DJ Mark played some cool tunes whilst the guests settled in the decadent atmosphere.

First set was at 8:45pm. Highlights included EVERYONE singing along to ‘Don’t Stop Me Now’ and several attempts at the moonwalk during our rendition of Beat it. We had a quick break between sets and we were back on for the second set. Jamie went out and played in the crowd which they loved! The new tracks went down amazingly. We also threw in some of our 1960s tracks, ‘Twist & Shout’, ‘Twist Again’ and ‘Do you Love Me’. They loved it! The dance floor was full the whole night. Our hard-working roadie Cameron was there to capture the whole night, his amazing photos to follow…soon!

We hope to see you at a wedding, theatre, party or concert soon!

We are taking the band to Hampshire, Kent, Hereford and Dorset next week and also have a few overseas concerts coming up.

Make sure you get tickets for our Halloween show!