The Zoots perform at the Masquerade Theatre

The Zoots have been soooooo busy this year and have been away so much its been tough to keep up to date with all our news. We had a fantastic November and got to tour some fantastic places; Turkey, Croatia, Portugal, Italy and a brief trip to the Azores. We have some exciting times ahead, in December we are going to the UAE and Oman in the Middle East aswell as Holland, Belgium, Germany and France. To cap it all off we have a show in Cuba on New Years Eve!! Then to Jamaica early January! Lucky us!

Below is a picture of us being the first to arrive at T2 at about 4.00 am on a cold November morning on our way to Turkey. Travelling to all these warmer places makes winter so much better! 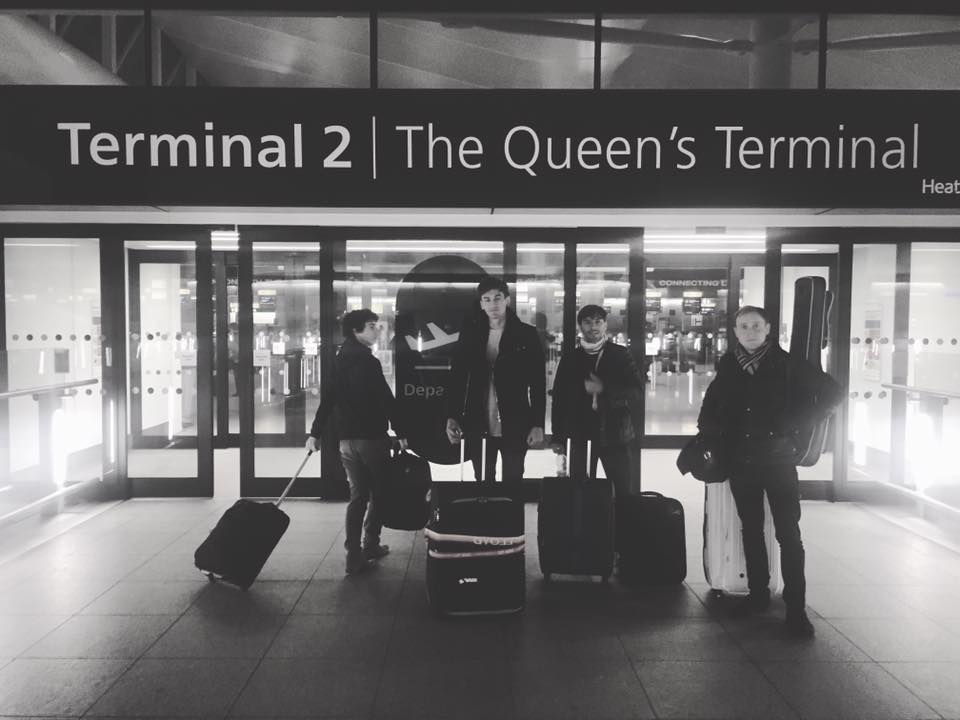 Our show at The Masquerade Theater was our best show there so far since The Zoots started playing there four years ago. Luckily for us a wonderful lady called Ana Josipovic was there to capture the show and she kindly sent us these fantastic photos. Thank you Ana! They are fantastic!

It has been great addition to the show now our drummer Simon is singing his own solo song. We asked Simon to sing ‘ With a little help from my friends’ and it has been going down fantastically well. Simon has done so well as he only started singing last year, it is a huge achievement. He took over from Mike East in August 2015 who was a tough act to follow. Well done Simon!

Tommy has been enjoying his first year with the band and he has been a fantastic addition to the team. Having a good energy and positivity is what keeps an act going from strength to strength. We want to make sure we keep getting booked for bigger and better shows.

Ben‘s guitar playing gets better and better and he continues to get more accomplished as a performer each show. Our harmonies have always been a fundamental part of The Zoots sound since we started in 2009. In the early days we only had three part harmonies but now we have five! It’s getting better every show and we can even play The Beach Boys now.

We were very lucky to have some very special guests to perform with us. The brilliant Kirsty and Caitlin from Northern Ireland were tremendous fun! Thank you girls for a great performance.

Before I started playing in bands I played lots sports and I really enjoyed being part of a group. I was lucky enough to be part of many successful teams, I won a sacks full of trophies, medals and wanted to go professional. I loved touring and being an important part of the team.

Sport was my main thing until I fell in love with performing music in my teens and I never really looked back. I am very grateful for my sports background as it helps me so much day to day. The performing concert equivalent to winning is entertaining everyone in the room. I always give as much as I can, it doesn’t matter what’s happened that day, or what anyone says to me, I am there on stage to do my best. If someone in my team is having a bad time I’ll raise my game to make up for it, and if I’m not so good then the rest of the band make up for it, that’s what teams do. Thats why The Zoots are so good.

I have never missed a gig and short that time on stage is so important. You never know who is in the audience and in my experience it often the most unlikely venue and time where you meet someone who can offer you an opportunity.

Now we have five Zoots in who rely on performing as their main income it is even more important for everyone in the band to put on the best performance for every show. If I go crazy and run around the theater, I confess, I may make a few mistakes, but the audience would prefer that than if I just stood in one place the whole show. This is what I do and what I love. After all it’s probably too late for me to be a professional sportsman!

Bill Brunkhorst our compere we have worked with a few times, what a lovely man, one of my favourites! Thank you so much to Bill for having us at The Masquerade Theatre and all the technical team.

Thank you to Harriet, Tommy, Ben and Simon and our guests Caitlin and Kirsty.
Most of all thank you to Ana Josipovic for the fantastic pictures.

All the best Jamie Goddard