Back to the top
×
Uncategorized

We met Anna and her family, husband Stuart, son Fraser and daughter Elizabeth when we performed on a cruise in 2015. We were sailing through the med having the best time! We performed in the theatre to a crowd of 1,500. When we asked for a volunteer, a small hand shot up, and young Fraser was chosen to join us on stage when we performed ‘Really Got Me & All Day and All Night‘. We gave him an inflatable guitar and he rocked out like a pro with our lead guitarist Ben. It was brilliant.Afterwards we met with the family and had some pictures taken with Fraser. We kept in touch with the family, when we returned back to the UK, Stuart emailed to tell us that Fraser wanted to learn the guitar!

In December 2015, the devastating news reached us that Stuart and Fraser had been hit by a car whilst crossing the road together. Stuart had passed away and Fraser was fighting for his life in hospital. Tragically Fraser didn’t make it, and at just 7 years old, he too, was taken from us.

Although we only knew the family for such a short time, the news hit us hard and we were devastated.

Later we heard that Fraser’s mum Anna had made the decision to donate Fraser’s organs, in doing so, Fraser has saved 4 lives. Anna has made it her goal to get as many people as she can talking about organ donation, and has set up the charity, Believe.

Anna emailed us in January and told us the idea for the Believe Ball. We jumped at the chance to be involved, and began talking dates, settling on the 17th of September, just after Fraser & Stuart’s birthdays. The countdown to September began!

Fast forward 9 months, and Believe is bigger than ever. Anna has been very busy spreading the word about Believe, and the charity has gained such a huge momentum! You can read more about it here. We’ve been told there’ll be around 500 people at the ball, we’re really looking forward to performing.

Hello Saturday the 17th of September 2016. We’re on our way to Cardiff City Stadium where we’ll be performing in the Ricoh suite. The sun is out and we feel good.

We’re here! We met Anna and the team at Cardiff City Stadium when we arrived, and we headed up to the Ricoh suite to set up and sound check. The room was huge and it looked brilliant.

Set up and soundcheck went well. We’d brought extra speakers with us to cover the huge area.

Shortly after setting up, it was time to get ready. We had a pretty cool changing room, one of the boxes! There was a great view of the pitch!

The guests were arriving, and we went out to join them. Anna had kindly arranged for us to have a table and be part of the meal, which was so kind, we were so touched. We joined the guests for the drinks reception, with the very special engraved ‘Believe’ glasses, before heading to our table (number 35), where we met the very lovely Sarah-Jane Outten from the Cardiff Times. Sarah-Jane was great and we enjoyed sharing a table with her.

The food was divine! Feeding 400 people delicious, nutritious and tasty food to each and every guests is no mean feat. We thoroughly enjoyed the meal, and taking part in the heads & tails, hearing the talks from Anna & Sarah, and our drummer Simon even got to purchase his very own Believe Bear /9who would be making his debut on the drums a short while later.)

Here we are with Sarah Jane from the Cardiff Times.

After dinner, we headed back to our box to get ready go on.

And before we knew it, we were onstage, getting ready. We weren’t sure if everyone would get up and dance right away as they were serving desserts when we began. Our plan to ease everyone gently into the evening with some quieter numbers went straight out of the window, when everyone flocked to the dance-floor the moment we started (we think maybe there was something in the wine).

We played lots of songs from our repertoire, something from almost every era. I enjoyed watching everyone sing and cheer along to 500 miles (Anna & Stuart had this song played at their wedding), and sing along to ‘Livin’ on a Prayer’. The dance-floor was packed the entire evening. There was another stage opposite for the MC & DJ for the night, so Jamie & the boys kept stage hopping when they could!

It was great to have Tommy play the double bass as part of our set, he’s so brilliant. Neil performed some really brilliant solos on the guitar, and left the crowd shouting for more! And Simon really is an animal on those drums!

We ended the night with ‘We Are Young’ by Fun, which was beautiful and sad all at the same time. Anna and Jamie stood in the middle of the dance floor, with the guests in a circle around them. I held up Simon’s new Believe Bear and sang my bits with a tear in my eye. A beautiful end to a truly wonderful evening.

We had some photos afterwards with Anna & her mum, and signed the (womens) T-shirt which Nathan had won in the raffle. He assures us he wears it all of the time.

Here’s a little video of the ball:

Thank you so much to Anna for inviting us to be part of such a special occasion, we were so honoured to be there. 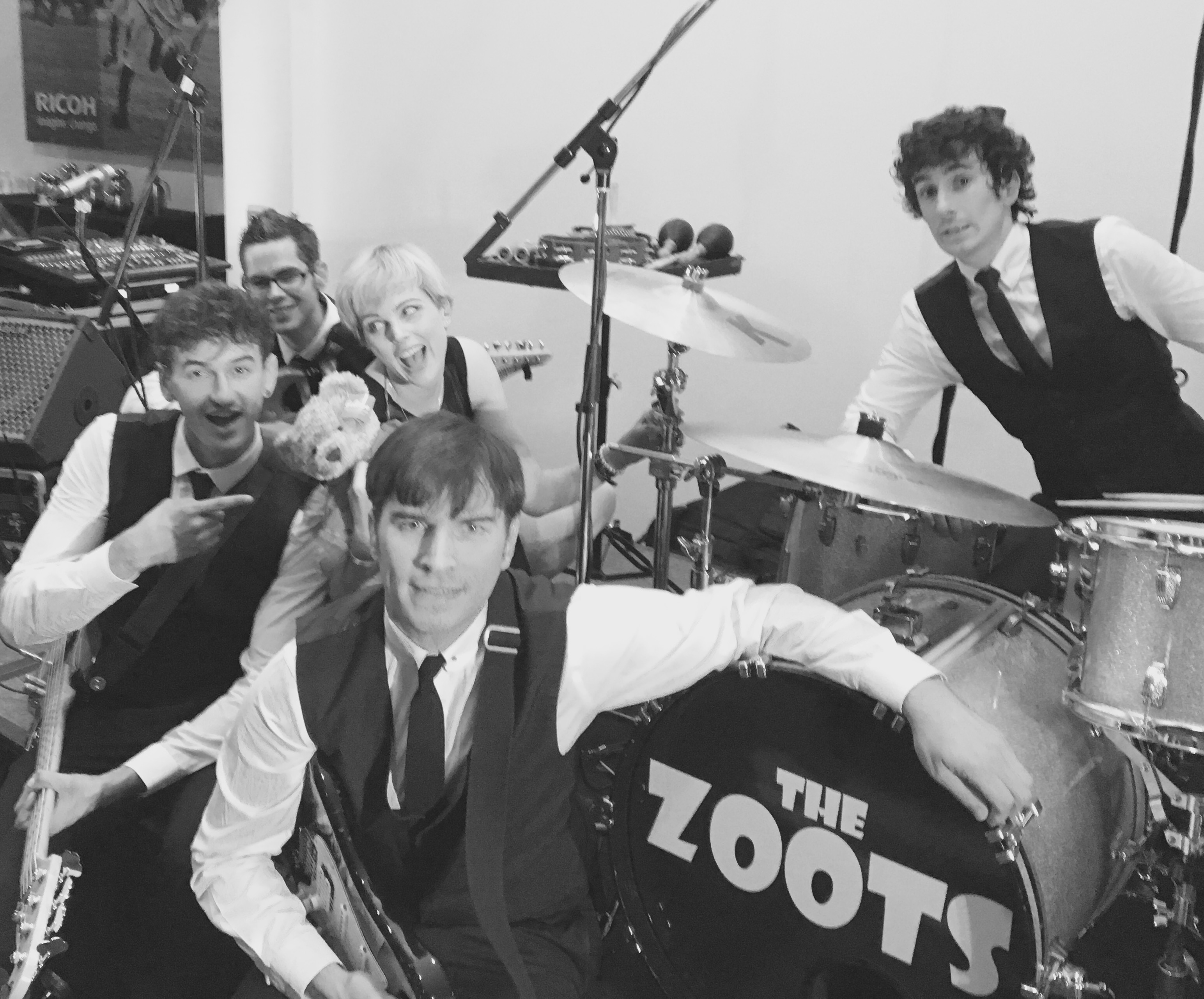 If you’d like to donate to Believe, the details are here.

Huge thanks to Tommy, Simon and Neil for doing a brilliant job and making us so proud on an evening we’ll never forget. Thank you to Melissa & the team at Cardiff City Stadium who were really helpful and organised. Thank you so Sarah-Jane for being a lovely person for us to share our table with. Thank you to Sarah for helping us load in and making sure we had everything we need. Thank you to the wonderful guests who danced the night away. Thank you to everyone who took the time to talk to us afterwards. Thank you to Anna for having us, for organising the event, and for being a total inspiration.

Anna left this lovely review for us after the ball:
Simply awesome “fabulous” outstanding ! We first came across The Zoots 2015 on a cruise ship around the med! My gorgeous little boy rocked out on stage with The Zoots and had the best night ever. Following our own tragedy in December last year when both Stuey and Fraser
Passed and the organ donation of Fraser we set up believe. I asked the Zoots to perform as our own memory of that Amazing night at our first charity ball 2 days after Fraser’s birthday.
Well the zoots were phenomenal and better than I remembered and the night became a very fitting celebration for the boys and of the gift of life. We have received nothing but praise for the night and so much so that I have already booked them for next years ball! Zoots continue being “fab”

Harriet & Jamie and The Zoots 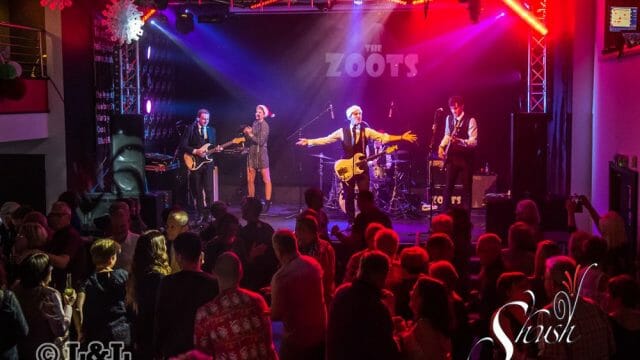 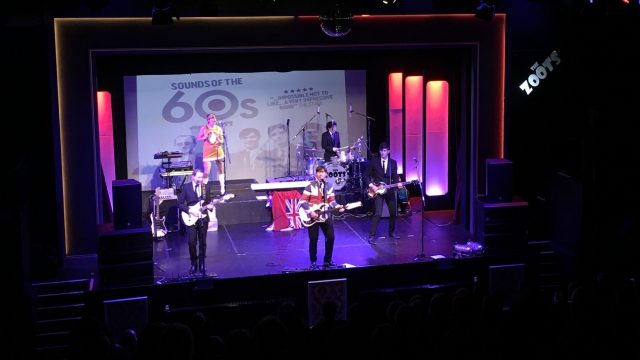 The Sounds of the 60s show in Scarborough